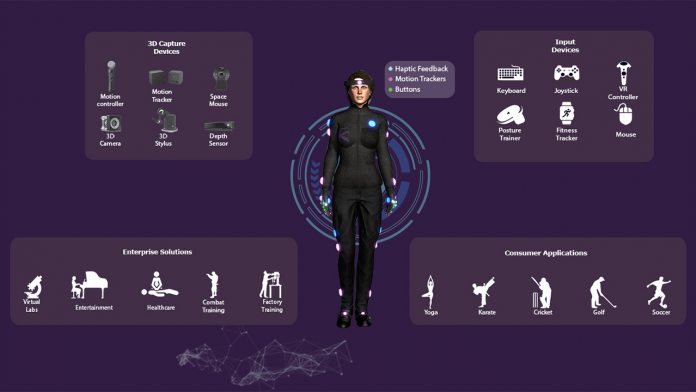 The VR industry is growing exponentially, but not everyone is convinced. Though the solution offers more immersion than ever before, that stops when you try to perform complex tasks. The HTC Vive and Oculus Rift make use of small controllers and camera arrays to track the user’s hands in 3D space, often feeling unnatural.

The holy grail of VR is a suit that allows users to use their whole body in a natural way. Startup Kaayatech claims to have the solution thanks to a HoloSuit with up to 36 embedded sensors.

It’s a higher degree of precision than most MoCap suits on the market right now, with multiple trackers on each individual finger, as well as elbows, shoulders, knees, hips, and the spine. It also integrates nine haptic feedback points to bring physical sensation from virtual actions.

Not a Gaming Device

Consumers first though with this type of technology is gaming, but that doesn’t seem to be HoloSuit’s target audience. Instead, it’s looking for use in training scenarios in sports, healthcare, education, and industrial.

The suits haptic points are nothing next to HaptX’s bulky VR glove prototype, which has hundreds in a single hand, but it should be enough for users to gain some sense of their body’s interaction with the world.

Thanks to its big promises, HoloSuit has already reached its funding goal with 25 days to go. However, as you would expect, this tech doesn’t come cheap. A full ‘standard’ suit with 26 sensors is $999, and Pro 36 sensor version $1,599.

That’s double any of the popular VR headsets, but its ability to create muscle memory in simulations could be invaluable.