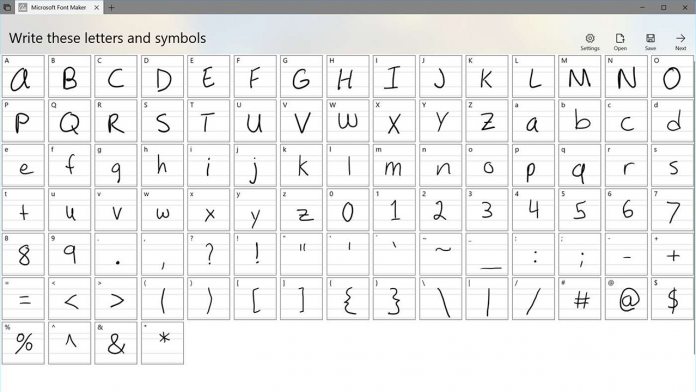 Microsoft has been making a ton of improvements to its Ink functionality in Windows 10 and its now bringing that custom handwriting to the keyboard. A new Windows 10 app called Microsoft Font Maker lets users create their own custom letters for use in any program.

The app requires Windows 10 version 16299 or higher but has no other requirements. It’s clearly aimed at users that have a touchscreen or graphics tablets but want the speed of typing.

Microsoft Font Maker was initially planned for release with the Fall Creators Update but was delayed for unknown reasons. The final app is still relatively simple, but it has some tools to make the font creation process easier.

After writing the individual letters of their font, users write letters so the program can get a better idea of how characters link together. Users can then preview the font and set the space between letters and words manually, as well as the overall size.

The examples on the Store show impressive results that looks very natural. Letters still look the same every time with no variation, but it’s barely distinguishable other than that. Only English is supported at the moment but you can draw whatever you like in the boxes. This means you can create your own windings-style font if you like, though we’re not sure why you’d want to.

Though Microsoft’s font tool has been in the store since May, it began promoting it with the release of Windows 10 build 17704 yesterday. The Insider update removes Windows 10 Sets once more but introduces some vital privacy settings to the OS.

You can grab Microsoft Font Maker from the Store.