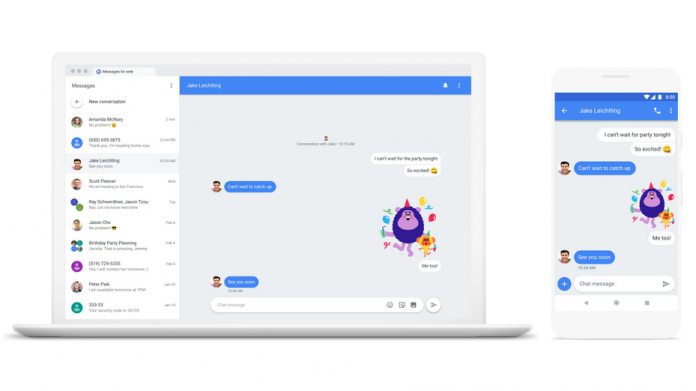 Google has finally launched its Android Messages for Web app, letting users on PC and Mac text without interruption. The compatibility is rolling out the Android app as we speak but it yet to reach many users.

According to Google, the functionality will take a week to get to everyone and will be available via the app’s fly-out menu. The feature seems to work much the same as WhatsApp, asking you to scan a QR code in your PC browser to link the two devices together.

As well as messages, users will be able to send stickers, emojis, and images. There’s a toggle to remember the computer for later use, and it works on Chrome, Firefox, Safari, and Microsoft Edge.

Unfortunately, it doesn’t work with Internet Explorer, likely due to security issues and its dwindling userbase. As well as desktop notifications, the tab shows a red dot when you have unread messages, as well as a number. There’s also a night mode to prevent eye fatigue, which will be a welcome sight for many.

Notably missing is the ability to search for and send GIFs, but it’s likely Google will add this at some point. GIFs are a new feature for the app and are joined by smart replies, link previews, and one-time password copying.

However, it’s worth noting that the web app may soon become irrelevant on Windows 10. Microsoft is working on an app called Your Phone that promises text messaging, image and file editing, notification previews and more.

It’s likely Google’s app will have more messaging features than Microsoft’s, but the multi-purpose, non-web experience may prove more compelling. In the meantime, you can use Messages for web here. Don’t forget to update your Android app to the latest version.