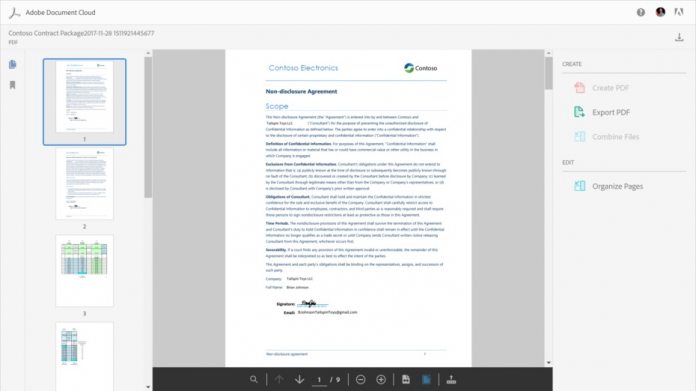 Microsoft and Adobe are extending their ever-growing partnership. The two companies have announced the integration of Adobe PDF into Office 365. This collaboration means Adobe’s service will be located in the ribbon for web versions of Word, Excel, and PowerPoint for Office 365 subscribers.

As a PDF management tool, Adobe PDF will bring more document control to users. For example, it can convert documents into PDF format. This is important because it maintains formatting, layouts, and other details while converting the file type.

PDF support is part of Adobe’s wider Document Cloud service, which is now part of Office 365. We have previously reported on Adobe Sign integration across Microsoft Teams and other services in Office.

The service is now the e-signature of choice for Office 365, while Microsoft Teams workplace chat platform will be Adobe’s preferred service for its Creative Cloud, Document Cloud, and Experience Cloud services.

While PDF integration is coming to the core Office apps, OneDrive and SharePoint will also receive the additional support.

The news comes just after Microsoft announced a redesign of Office, which Adobe PDF will be part of. To help ensure this, Microsoft worked to a guideline it calls “The Three Cs”. These principles are detailed in the announcement as such:

“Customers—We’re using a customer-driven innovation process to co-create the design of the Office apps. That process consists of three phases: initial customer research and analysis; concepting and co-creation; and validation and refinement.

Context—Customers love the power of Office, but they don’t need every feature at the same time. We want our new designs to understand the context that you’re working in, so you can focus on the job at hand. That means surfacing the most relevant commands based on the work you’re doing and making it easy to connect and collaborate with others.

Control—We recognize that established skills and routines are powerful—and that the way someone uses the apps often depends on specific parts of the user interface. So we want to give users control, allowing them to toggle significant changes on and off.”