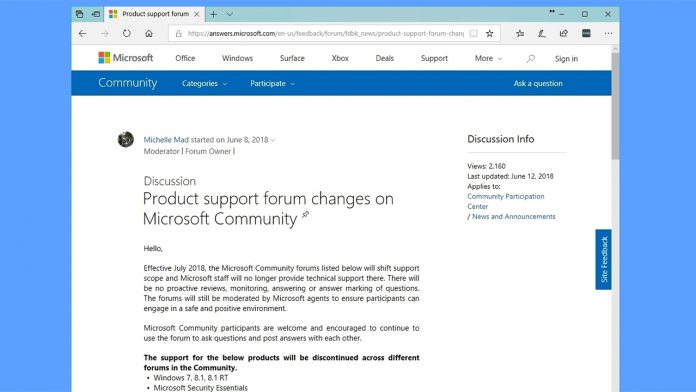 Come July, Microsoft will no longer help community forum users who have problems with older devices and software. As part of a support shift, staff won’t do proactive reviews, monitor content, or answer questions.

The topics affected include:

The majority of these sub-forums will remain open for Microsoft Community participants, but some will be locked completely. That includes the mobile devices forum, as support will be shifted to ‘Other Windows mobile devices’.

Microsoft Band will also be locked, as well Zune, which remain available for browsing. Despite this, the forums will still be moderated by Microsoft to “ensure participants can engage in a safe and positive environment”.

Though the move will be annoying for the ~40% of users who still use Windows 7, it’s difficult to complain. The OS has been out of mainstream support for some time, and the same can be said for the other products that are being discontinued.

With a large number of bugs in recent Windows 10 builds and Surface products, it makes sense for Microsoft to refocus. In many cases, its response has been far too slow, and this may help somewhat.

The company will still offer other forms of support like security updates and extended support. This means consumers will be able to pay for support, with limited complimentary aid for some products. It’s all in line with Microsoft’s established Lifecycle policy.

Of course, business users will still get support for the above products and are encouraged to use the TechNet forums.