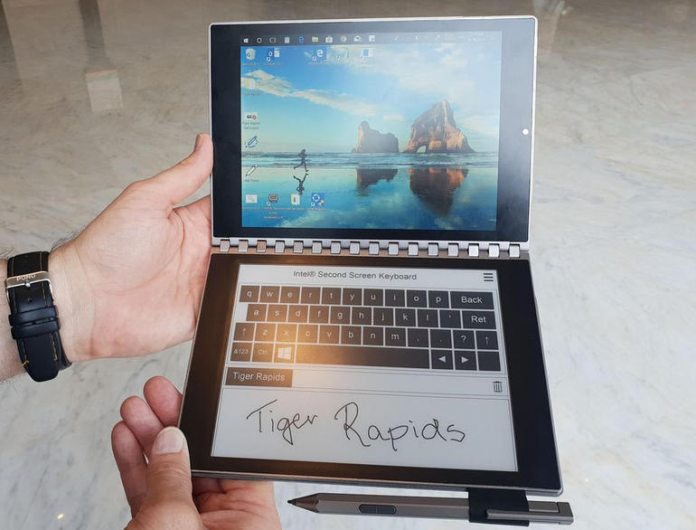 It seems 2019 in the laptop market is being defined by screens, or more specifically how to include more than one in an innovative way on a device. We have seen Asus turn heads with its ScreenPad second display embedded in the trackpad of the ZenBook 15. Now it seems Intel is highlighting how PC makers can do even more to change the concept of the laptop hardware.

Intel has showcased a laptop Tiger Rapids prototype that is comprised of a dual screen. The device is aiming to change how we see and use laptops. That is not necessarily a good thing considering the laptop form has stayed the same for decades. There’s a reason for that; the screen with a keyboard deck form factor simply works.

We have heard before (for Microsoft) that the keyboard could eventually go away. While that is probably true, and the PC market is declining, customers still want traditional laptops. Sure, 2-in-1 hybrid machines are flying the flag in the PC market now, they still look and feel like laptops.

That’s not to say we are not excited by Intel’s prototype. We have already seen Microsoft experiment with folding screens and devices. That could lead to a Surface Phone, or could be in conjunction with Intel’s prototype. Gregory Bryant, senior vice president of client computing at Intel, told CNET that the company is aiming to create mobile devices with laptop computing capabilities.

If that’s the case, it tallies with Microsoft CEO Satya Nadella, who has suggested the company’s future in mobile may not be with a smartphone-like device.

Of course, Intel is not a hardware company, so the prototype is a reference for OEMs to embrace and expand upon. At Computex, the Tiger Rapids prototype was showcased with a 7.9-inch display that runs Windows like a laptop. The second screen is an e-inch panel for drawing. We have seen Lenovo get close to this with its Yoga Book, which uses a WACOM second screen.

What’s interesting about the Tiger Rapids is it is being pushed as a mobile device and not a tablet. It is thinner than an iPhone and gets 13 to 15 hours of battery life.