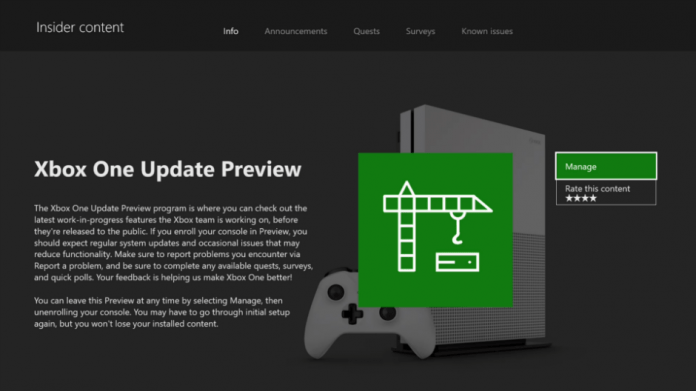 The Xbox One Update Preview gives alpha users a ‘Skip Ahead’ option to try the next major update before the previous one releases. Like Windows 10, it fits in with Microsoft’s bi-yearly cycle and will let customers preview Redstone 4 and 5 simultaneously.

“These builds will typically be months out from release to GA and will enable Xbox Insiders to view new features, apps and more,” said Xbox program manager Savannah. “By piloting builds well in advance of their release, Xbox Insiders will play an even bigger role in shaping the future of Xbox and will be able to communicate their sentiment and suggested changes to members of the Xbox Feature Team via Quests and Surveys found within the Xbox Insider Hub.”

However, the feature comes with one major caveat – bugs. As the very latest Xbox build, it will have an even higher volume of issues. Players may experience serious problems that prevent them from normal functioning, so it’s not recommended for your main console.

It’s also worthing that all features and known issues may not be in the changelog. Microsoft is constantly testing new things before committing, so you’re essentially their guinea pig. It’s not for everyone, but those interested can jump on board as early as next month when they’ll be asked their preference.

You can find more information about the Xbox One Update Preview on the official blog.