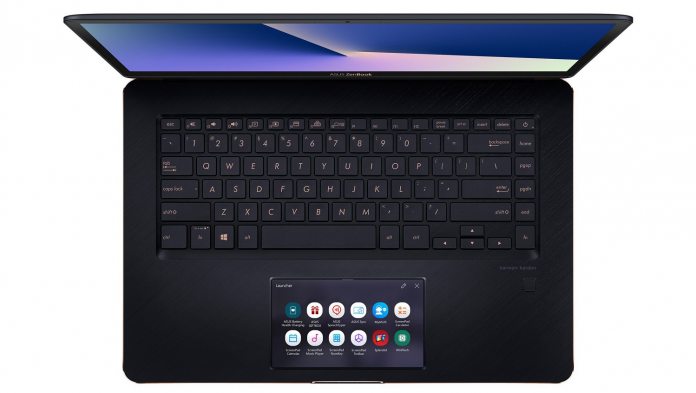 Late last month, I wrote about Asus pursuing a second touchscreen integration on an upcoming laptop. I speculated this would probably be similar to Apple’s MacBook Pro Touch Bar. However, with the newly announced Asus ZenBook Pro 15 ScreenPad, Asus was thinking much more left field.

As you can see in the image above, the company has embedded a fully functional touch screen in the trackpad position. Whereas Apple went for the practical strip of screen above the keyboard, Asus went for the most visual but arguably less useable trackpad replacement. Make no mistake, I am not being critical, this is amazing in the zaniest way.

The ZenBook Pro 15 was showcased at Computex 2018. With the trackpad, users get a smartphone sized second screen on their device. While the Touch Bar gives MacBook users some additionally operability functions, the sheer size of the Asus screen should allow much more functionality.

While it seems like a gimmicky addition, early reports suggest the ScreenPad is both interesting and useful. Probably the most obvious question is what about the touchpad functionality? Well, the ScreenPad works exactly like any other touchpad, so you can move your finger around to control the cursor.

Of course, with an embedded display, it is also a multi-functional touch-enabled display for Windows 10. As mentioned, its 5.5-inch width is smartphone sized and the 1920 x 1080 Full HD resolution is surprisingly generous.

So, what does the ScreenPad do? Quite a lot actually. For example, it can be an app launcher, or become a second screen for services like a calculator, calendar, or music player. This obviously will enhance multitasking or media playback controls.

Perhaps the best thing about the ScreenPad is it is integrated with Microsoft services. Asus worked with Microsoft to bring Office integrations to the second screen. Shortcuts and editing tools are available on the pad. Microsoft is not the only major company on board, YouTube and Spotify are also integrated, among others.

Asus will release a developer kit to spur creativity. If it catches on, don’t be surprised to see deeper use of the pad, such as gaming controls and other content. Of course, this is a first attempt and we would like to see it expanded and even adopted by other companies. Could a developer community grow around this niches feature?

I am not sure, but it’s an interesting start. This is the sort of thing Apple would be lauded over for developing. I am a minority Windows 10 fan who loves the MacBook Touch Bar and was calling for a similar integration on a Windows machine. Asus has delivered the goods and then more with a whacky take on the idea.