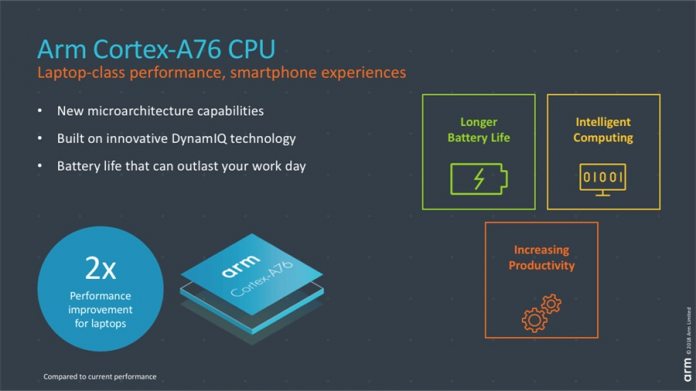 It seems the race for ARM processing on laptops it is heating up. Today, chip designer ARM released its Cortex-A76 CPU, which it is says provides a 35 percent boost in performance over its predecessor. As a result, Windows 10 on ARM laptops may be getting more powerful in the next generation.

In terms of processing on Windows 10 on ARM PCs, there has been plenty of movement this week. Qualcomm is reportedly working on a Snapdragon 850, which will be a dedicated CPU for Always Connected PCs.

The company is already the core supplier of Windows 10 on ARM through its modified ARM-based Snapdragon 835. However, compromises made to the chip to get it to run on laptop hurt performance. While battery life improved considerably, reviews of the first generation Always Connected PCs were hardly impressive.

While Qualcomm is still trying to solve its problems, ARM seems to have jumped ahead. The Cortex-A76 will come to devices in 2019. As I wrote earlier this week, the situation does little for the current gen of under-performing Always Connected PCs. It seems those devices are all doomed to become obsolete very quickly.

“Cortex-A76 represents the best fit for the laptop space because the performance uplifts allow exceptional delivery of the most important productivity apps such as the Microsoft Office suite, providing a much faster, smoother user experience. Cortex-A76 based laptops are expected to deliver twice the performance on the current Arm based generation.”

Indeed, ARM is touting the new Cortex as competitive against Intel’s top-line Core i7 processors. Mike Filippo, lead processor architect for the company, says the chip matches the Intel Core i5-7300. However, with more cache memory it could perform like a Core i7.