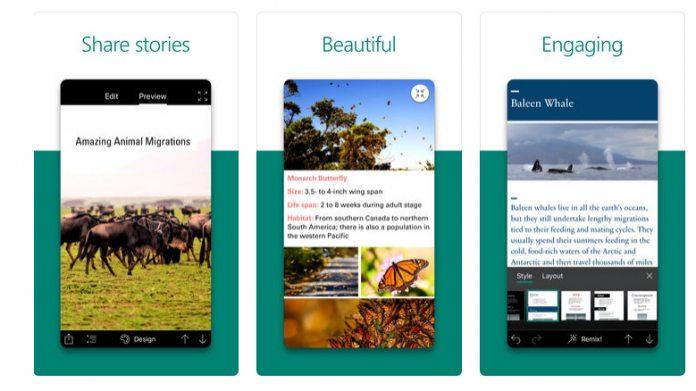 Microsoft Sway for iOS has netted a significant update with several major features. As well as design improvements, Microsoft has improved organization tools, new drag-and-drop functionality, and tap to resize.

For the unfamiliar, Sway is a presentation program but differs from PowerPoint in several key areas. It’s primarily a web-based tool with a focus on responsive design, collaboration, and sharing. As such it’s much more restrictive but offers great visuals very quickly.

In many ways, Sway is a modern alternative to PowerPoint, and its new features are in that vein. Microsoft’s Sabrina Mohamed calls it “the biggest update in the history of Sway for iOS”.

One of the most useful features coming to Sway is the ability drag and drop to group items. The functionality makes it more intuitive, letting users drop images on top each other before changing group type.

Further image tools come in the form of tap to resize. Microsoft has introduced three quick options: subtle, moderate, and intense. You’ll see your image change on the canvas instantly and can then add captions by tapping edit.

These features gel perfectly with the ability to switch quickly between edit and preview modes. At the top of the screen, there are now ‘Edit’ and ‘Preview’ tabs that you can tap to change. To aid in this, the edit mode reduces visual clutter by sticking to a plain white canvas.

Finally, a small but welcome addition lets users edit text from above the keyboard. A toolbar lets you change text to block quotes, as well as bold it or add bullet points, numbered lists, and hyperlinks.

All of these changes are available now to Microsoft Sway users and can be grabbed from the App Store.