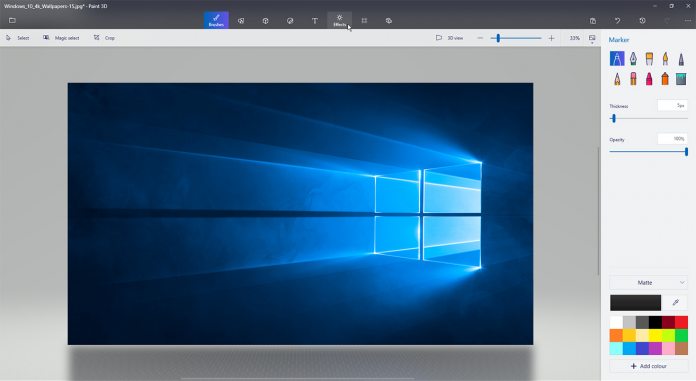 Microsoft has released an update to Paint 3D that includes some interest design tweaks and improvements. It pushes the version number to 4.1805.15037.0 and appears to be available on Windows 10 versions past the Creators Update.

The primary change comes to the ribbon, which displays its icons differently. Rather than a choice between labels or icons, it integrates both, displaying the tool name when you hover. It’s a small touch but shows how Microsoft’s Fluent Design system is evolving.

There have also been a number of bug fixes and performance increases, combining with the design tweaks to create a more fluid experience.

These minor improvements build on a more significant update from March. Early in the month, Microsoft bought a more intuitive 3D view to the app, letting users see a 360-degree view of their creations.

Previously, users had to switch constantly between 3D and 2D views to edit their creations. Thanks to the improvements, you can now edit and orbit at the same time. Like the ribbon, it’s arguably a feature that should have been there since the start, but it’s appreciated nonetheless.

However, that’s not that say the renewed attention is without motive. Also in March, it became clear that Paint 3D will get Windows 10 Photos integration. Microsoft is also bringing 3D to SharePoint with HoloLens support, so it’s clear it the application will only become more important.

As a result, it’s clear Paint 3D will continue to get big improvements, but these minor ones will help to make it more desirable. You can grab the latest version from the Microsoft Store.