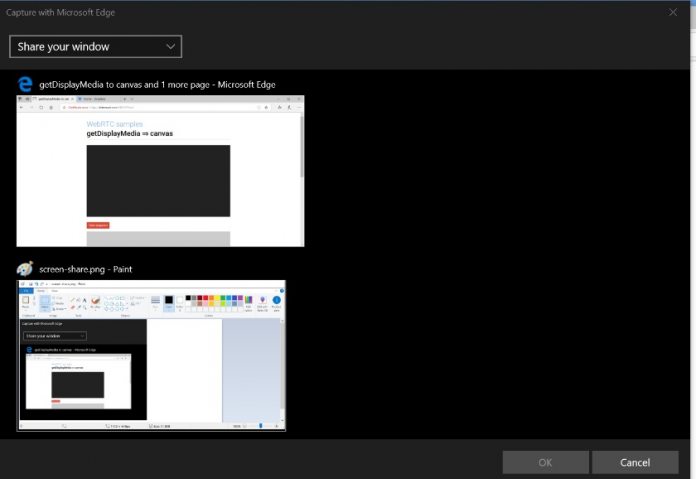 When capturing a screenshot on a browser, users must turn to a third-party app, extension, or use the in-built screen capture on a PC. Either way, there is a step in the way that Microsoft wants to remove. Starting with EdgeHTML 17 for Microsoft Edge, the company will support the Screen Capture API.

This means developers will be able to bake Screen Captures into their services. The support is available today for users running Windows 10 April 2018 Update. Setting up the API in an app, website, or service can be done through Microsoft’s free virtual machines.

With the Screen Capture API in Microsoft Edge, websites will be able to capture the user’s screen without a plug-in. Microsoft suggests the feature will help presentations and meetings to more efficient.

It’s not just on Edge either. The browser with the API installed will be able to capture all Windows applications. Interestingly, Microsoft says this includes Universal Windows Platform (UWP) and Win32 apps.

In an announcement today, Microsoft says the tool will solve many efficiency problems and even aid in security:

“While screen capture functionality can enable a lot of exciting user and business scenarios, removing the need for additional third-party software, plugins, or manual user steps for scenarios such as conference calls and desktop screenshots, it also introduces security and privacy concerns. Explicit, opt-in user consent is a critical part of the feature.”

As mentioned, developers can use the Screen Capture API on Microsoft Edge EdgeHTML 17. That is currently available through the recently launched Windows 10 April 2018 Update. The Windows release was launched on Monday for manual download.

For those not manually installing the upgrade, they will have to wait until the April 2018 Update arrives through automatic release. That roll out will begin next Tuesday, but as it is coming in stages some users may not see it until a few weeks or months.