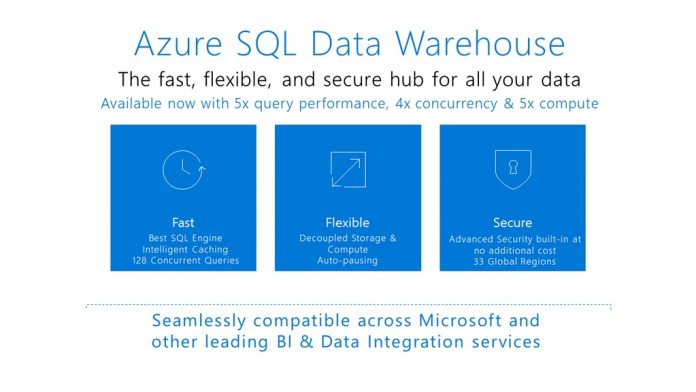 Specifically, Microsoft has announced the general rollout of the Compute Optimized Gen2 tier of SQL Data Warehouse. This is a performance optimized tier that can “turbocharge” analytics through the latest innovations in hardware and software.

Indeed, the Gen2 can serve 128 concurrent queries in a single cluster, besting the capabilities of Redshift.

“Powering these performance gains is adaptive caching technology that understands where data needs to be and when it needs to be there for the best possible performance” Microsoft says. Azure SQL Data Warehouse takes a blended approach of using remote storage in combination with a fast SSD cache layer (using NVMes) that places data next to compute based on user access patterns and frequency. We have also added Transparent Data Encryption with customer-managed keys to keep your data truly in your control.”

Azure SQL Data Warehouse has been available since 2015. Microsoft describes the service as the first to allow customers to scale compute independently and save costs.

Last year, Microsoft scaled up the performance to create more computing performance. To deal with the 1,000 TB scale, Data Warehouse will be upscaled to have computing power to 18,000 DWU (Data Warehouse Units). This is an increase from 6,000 DWU for the current package.