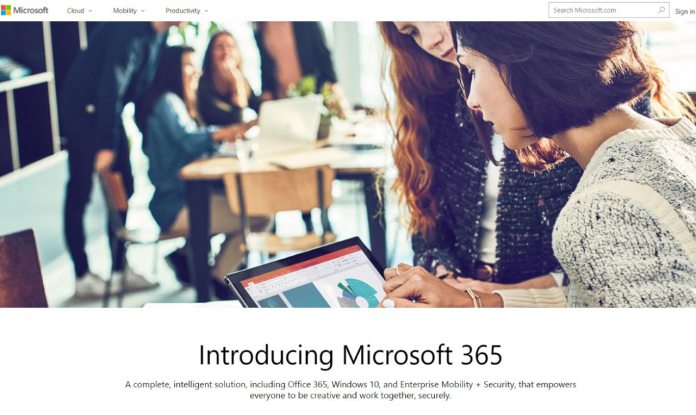 Microsoft 365 is a business-focused bundle of Microsoft products like Windows 10, Office 365, Enterprise Mobility + Security, and more. It is nearing a year old after launching back last summer. Now, the company has announced the suite is becoming a product in its own right.

Previously, Microsoft 365 has been sold as the bundle of software it is. However, Microsoft will now sell it as an integrated program. The decision comes after Microsoft’s recent executive reshuffle that saw Terry Myerson leave the Windows group.

“We’re running Microsoft 365 now as a product,” Anderson told me this week. “We can do a lot of integration on the back end. Now that this is all (Microsoft 365) cloud services, we can truly deliver these end-to-end scenarios. plus provide insights from the cloud.”

With the April Update, Microsoft 365 will be gaining some upgrades. For example, Delivery Optimization is debuting to give admins the option to update on one device and then use it to send updates to other machines on a organizational network. This feature will also work for downloads.

Delivery Optimization works in tandem with Windows Analytics to provide IT pros with tools for monitoring update statuses.

With a Microsoft 365 subscription, users can bring full Office Mobile applications to firstline workers. This integration works across Android and iOS platforms. The company also announced the following abilities coming to Microsoft 365 with the April Update:

Windows AutoPilot – Windows AutoPilot now includes an enrollment status page. This page enables you to ensure policies, settings, and apps can be provisioned on the device during that out-of-box experience before the user gets to the desktop and begins interacting with the device. Now IT can ensure every device is compliant and secure before it is used.

Expanded Admin Center – Users of both Office 365 and Microsoft 365 will now have access to the same admin center with the same capabilities. For Office 365 users, this means a simpler admin experience that easily integrates with your other Microsoft services—all without giving up any capabilities or control.