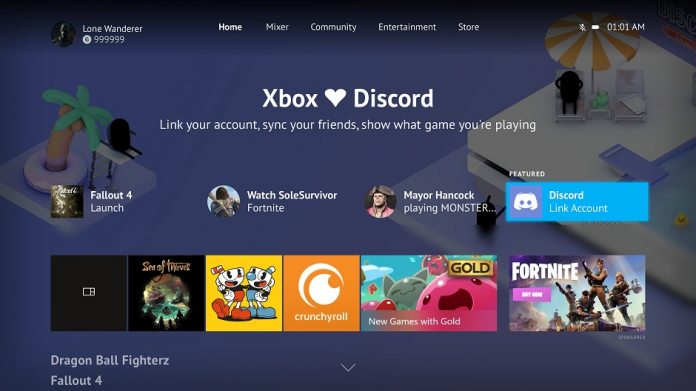 Microsoft today took to its Xbox blog to announce a collaboration between the Xbox team and open-source community chat service Discord. The goal of the partnership is to connect gamers across Xbox One consoles and Discord.

In its announcement, Microsoft says connectivity with other players is a huge part of gaming now. While users can already chat and interact through Xbox Live, the Discord introduction will add another way to efficiently communicate. The company says the collaboration is part of its commitment to provide more choice to users.

The company says integration with Discord will happen in the coming weeks and will make it easier for gamers to see what friends are playing. As well as working on Xbox One, the communication platform will also work on Windows 10 PC.

Discord account users can now link their profile to their Xbox account. Microsoft says the option will be coming to the Xbox Insider Program in preview soon. Xbox Live accounts can be added to Discord from Xbox One.

“Open the Account Settings menu on Xbox One, and select “Linked social accounts.” Here, you will see a new option for linking your Discord account. Once you receive your unique code from Xbox, open the Discord app and insert the code within the Connections tab.”

Also available on PC and mobile, the Xbox account integration will come to the Discord app in the coming weeks. It will be found under the Connections tab through User Settings. Users will have to give permission for the Xbox Live account to be linked.

“We’re excited about working with Discord and are thrilled to enable new ways for gamers to connect with one another online.”