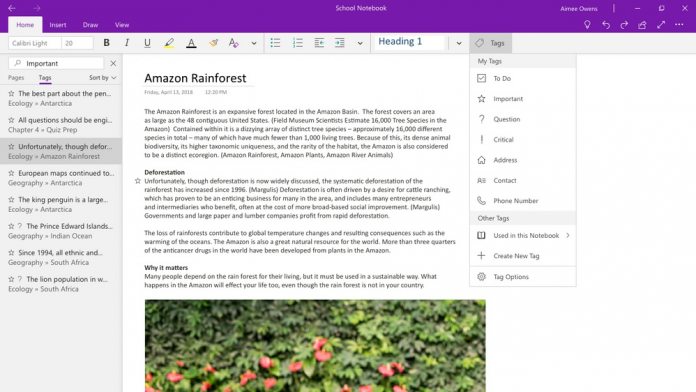 Microsoft has released a blog post detailing its plans for OneNote through 2018. Among the information is news on some upcoming important features for the cross-platform note-taking app. The company also confirmed it is transitioning from the classic app to the Universal Windows Platform (UWP) app.

Starting with upcoming features, Microsoft says it is improving the sync engine between various OneNote clients. Essentially, this means you will have a smoother experiences if you use OneNote across devices. For example, starting a note on your Android phone and finishing on PC will be faster and more intuitive.

Microsoft says the following features will be coming to the service through the remainder of this year:

Currently Microsoft has two OneNote apps in use, the classic desktop app and the OneNote for Windows 10 (UWP) app. Moving forward, the company will wind down support of the former to focus on the Windows 10 application.

This will coincide with the launch of Office 2019 later this year. OneNote for Windows 10 will become the only experience, replacing OneNote 2016. Microsoft explains why it decided to go with the Windows 10 app:

“The app has improved performance and reliability, and it’s powered by a brand new sync engine (which we’re also bringing to web, Mac, iOS, and Android). You don’t need to worry about being on the latest version since it’s always up-to-date via the Microsoft Store, and it lets us deliver updates faster than ever before. In fact, over the last year and a half we’ve added more than 100 of your favorite OneNote 2016 features based on your feedback (thank you!), with more improvements on the way including tags and better integration with Office documents.”