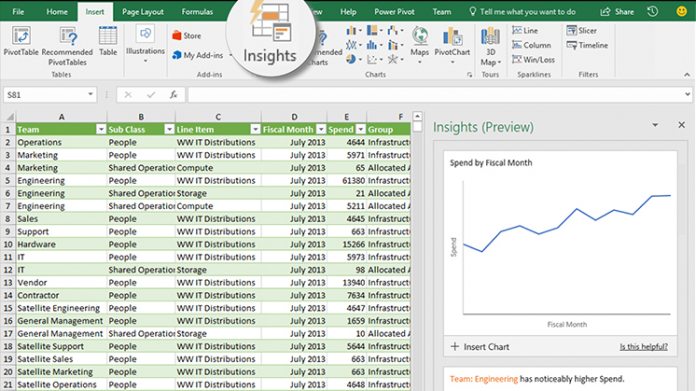 An Office Insider Slow build has rolled out to Windows, bringing with with several major features for Excel, PowerPoint, Outlook, and Project. Version 1804 has some long-needed additions and some suprises, enhanching productivity across the board.

The most notable feature is for Excel. Microsoft has added Insights, which helps users analyze data intelligently and offers relevant visuals in the task pane. It should save a ton of work and headaches in many scenarios.

It’s joined by several Outlook features, including the ability to listen to your emails, set pop-up reminders, and mark deleted items as read. These are all features users have been asking for and should make day-to-day management much less of a pain.

Microsoft has also added a single but important PowerPoint feature. You can now take notes using ink and convert them into readable text and shapes. This will help users who plan on a touchscreen make their work presentable.

Finally, Microsoft Project has been graced with several new features, primarily thanks to user feedback. Here’s the full changelog:

“Task board filtering: You asked for it! Streamline your task boards by filtering on key resources or summary tasks.

Sprint navigation: We heard you! You can now switch from one sprint view to another, and quickly move between sprints.”

You can update to the latest Office Insider build through the file menu as usual. Microsoft has visual guides to each features on its support page if you get stuck.