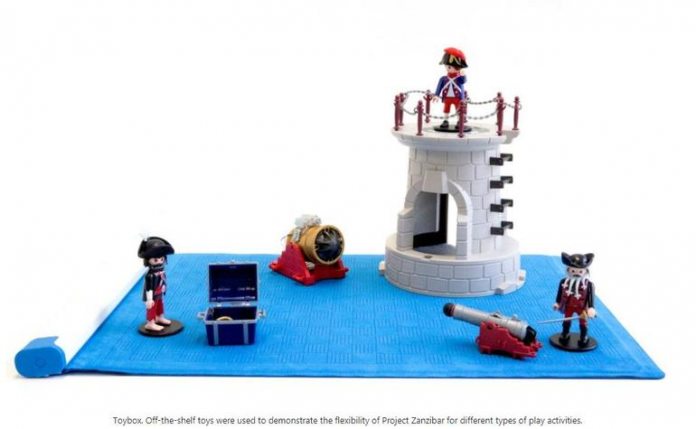 There are many activities that translate well to digital. Attempts to bring football, UFC and card games to PCs have been successful, but attempts to emulate board games aren’t always popular.

While games like Catan and Lords of Waterdeep have had successful adapations, others require a more physical approach. Rolling a die, firing out Uno cards and stacking Dominos just don’t have the same satisfaction when you’re clicking a mouse.

At the same time, getting a group of friends together isn’t easy. In the digital space, you can pull together individuals from across the world. Thankfully, Microsoft’s latest invention could be the best of both worlds.

Project Zanzibar is a smart mat that uses NFC tags to track the positions of physical pieces. It lets you place or hover an object above it and have it translated as a 3D model on your screen. It can even detect button presses and work with Augmented Reality.

If it makes it market, the applications could be pretty much endless. From online Jenga to lego-based Minecraft and learning tools. The idea is comparable to Nintendo Labo in that it bridges the gap between physical and digital play.

“The question driving us over a number of years was how you make interacting with a computer a very natural, invisible thing,” explained Microsoft Senior Researcher Nicolas Villar. “Our fascination was with making the technology invisible so that you get the power of technology without it feeling like you are using technology.”

Zanzibar would let toys come alive, without the need for expensive, table-length tech. Of course, it’s still early days, but as the volume or AR and MR devices increase, it could fit in nicely.

According to ZDNet, Microsoft is set to reveal more detail at the ACM CHI Conference between April 21–26. At that point, we’ll have a much clearer picture of its commercial viability.