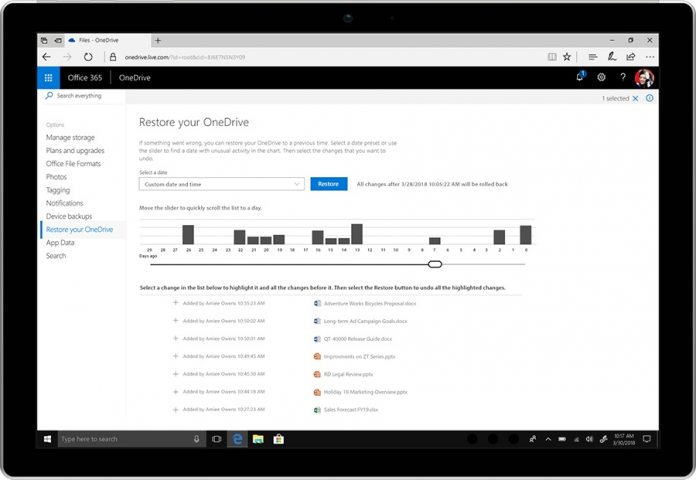 Microsoft is continuing to be proactive in its fight against ransomware with an incoming feature for OneDrive. Arriving this week, the File Restore ability will be available for the cloud storage service. You may remember this feature has been available on OneDrive for Business for some time. However, Microsoft is now migrating it to personal accounts.

File Restore was originally launched for business users back in January. As we mentioned then, the feature allows OneDrive users to easily restore their files from any point from the past 30 days. This is extremely helpful if you accidently delete a file, recover lost data, or head back to a safe point if you suspect an attack.

It is the latter function that Microsoft is talking up. The company presents File Restore as a solid way to combat ransomware. These malware attacks hijack a system and won’t unlock it until a ransom is paid. Oftentimes, attackers will use malware that also deletes files store in the cloud.

Microsoft has powered OneDrive to notify users by email when it detects mass file deletes. The user can then legitimize these deletes or confirm foul play and use File Restore to rewind to a safe point. “It’s the first of its kind in the industry,” says Seth Patton, general manager of Office 365. “We believe OneDrive is the safest place to store your files.”

Just like its debut on OneDrive for Business, personal users will need an Office 365 subscription to use File Restore.

Microsoft has also added other interesting security based abilities to OneDrive. Specifically, password protected links are now enabled on the service. Now when sending links with important data, you can lock them with a password.

Like File Restore, Microsoft says this feature has started rolling out today and will be with all Office 365 subscribers by the end of April.