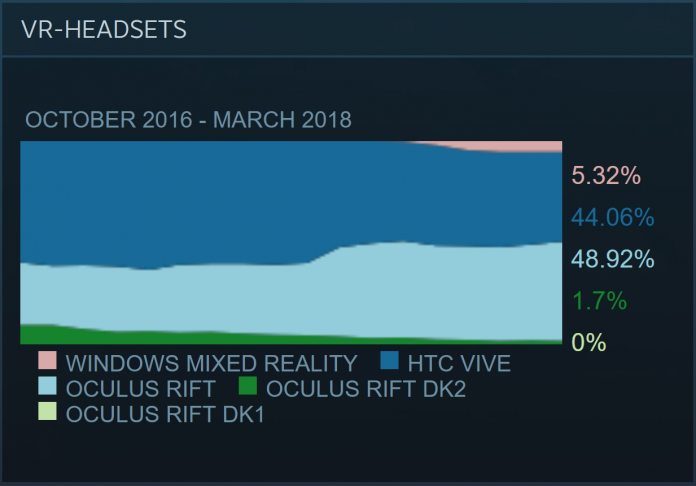 OEM headsets for Windows Mixed Reality are continuing to slump in the market, according to the latest data from Steam’s Hardware Survey. Facebook’s Oculus Rift has benefitted most from the failure of Windows headsets in terms of increasing market share.

Before continuing, it is worth noting Steam’s Hardware Survey is not definitive. As the name suggests, it just covers Steam’s own platform. Sure, the company provides the biggest cloud and VR gaming platform, but the market goes beyond. For example, the survey does not cover PC hardware sales.

To expand, Microsoft would probably argue Windows Mixed Reality is a PC concept first and foremost. Certainly, a significant number of headsets would be bought for PC and not Steam. Either way, enough excuses on Microsoft’s behalf because the company will still be worried about Steam’s survey.

OEMs clearly want their hardware to cross to as many platforms as possible. Manufacturers have been reducing the price of the devices in a bid to drum up interest. During March, WMR headsets held a market share of 5.32%, a slip from 5.36% in February.

There is an argument that Microsoft will be largely unaffected by this news. Windows Mixed Reality also support Oculus Rift and indeed the Vive. Users of those device are probably still running their headsets on PC.

It is also worth noting that Windows Mixed Reality has only been on the market for months. Microsoft is clearly pushing an evolving platform and there is certainly more to come. Still, while that account for the low market share, it is problematic that the platform is losing share.