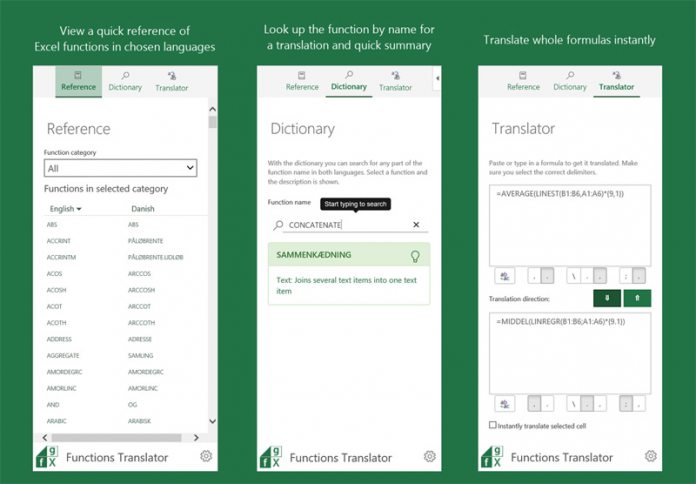 Translation is often something English speakers don’t even think about. That’s clear even in Microsoft’s Excel, where functions have strange or similar names that quickly become confusing if it’s not your native language.

Though Excel has had localized functions for some time, that doesn’t fix the problem completely. The majority of tutorials are still in English, and many have been taught US functions, despite the language barrier. Translating them manually can be time-consuming and a huge headache.

Danish employee Martin Ørsted noticed this very quickly, and vowed to solve the problem during Microsoft’s Hackathon. The result is a new Garage project accurately named Functions Translator. It lets users familiar with US functions work productively on localized versions, with support for all 15 localizations.

Ørsted had the help of Office store software developer Vadym Khondar, and has been working on the project since 2016. The add-in works in Excel Online, as well as 2016, 2013, Mac, and iPad.

However, the pair wanted to provide translated formulas as well as functions. After painstakingly finding a good solution, they took it core team members Jacob Nielsen and Steve Kraynak, who pointed to a way to integrate it on the cell level.

As a result, Function Translator lets you find translated formula simply by clicking on a cell, in an intuitive panel. It will be useful for users worldwide and is available for download today.

It joins features from the core Excel team, which enable cloud-based data types such as geography and stock information.