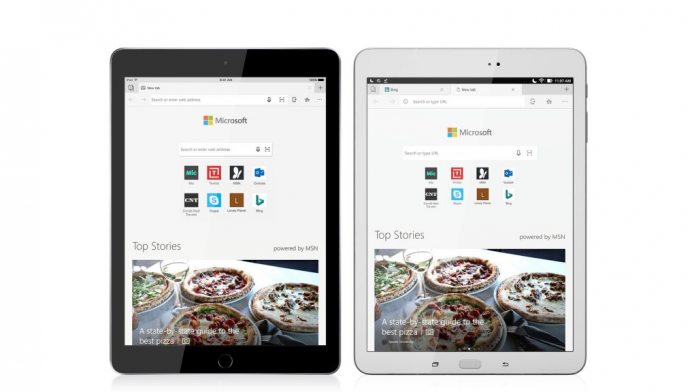 Microsoft has today expanded the reach of its Edge web browser. The company has made the browser application available on Apple’s iPad and Android tablets. Edge has been available on iOS for iPhone and Google Play for Android smartphones for some time. However, this marks the first time the browser is on the larger form factor.

Edge was originally launched on Windows 10 when the platform was released. Since then, Microsoft has been expending the availability of the browser. Availability on iOS and Android is important considering Windows 10 Mobile has sunk without a trace.

The browser entered preview on the rival platforms last October and left the testing phase in November. Still, we have had to wait several more months for Edge to land on tablet devices. Microsoft updated the original release blog post with a note for tablet users:

“Now, you too, can experience familiar features like your Favorites (including Roaming Favorites), Reading List, New Tab Page, Reading View, and Roaming Passwords in Microsoft Edge across all of your devices. And, what makes Microsoft Edge really stand out is the ability to continue on your PC, allowing you to open a web page from your phone right on to your PC.”

Microsoft says it will be introducing wider features for iOS and Android on Edge soon. In the meantime, the company is continuing to ask users to provide feedback for the browser.

The company says it aims to bring its Continue on PC tool to Edge on the iOS and Android. The feature lets users switch near-seamlessly between phone and computer straight from the home screen. Selecting a recent file presents users with the option to launch it on their desktop with only a short delay.

Continue on PC is also available on Android devices through the Microsoft Launcher servicer.