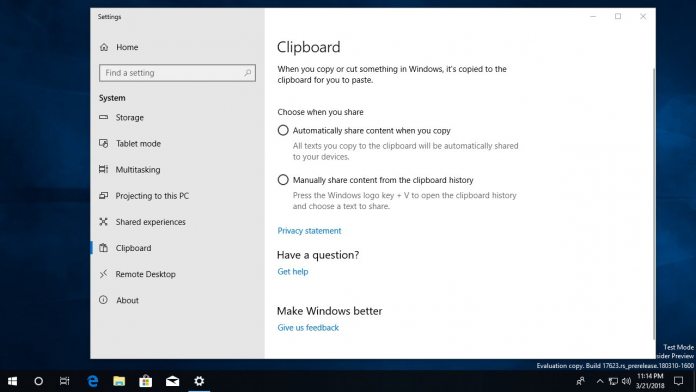 The feature is not on that build (also known as Redstone 4). However, it seems Microsoft’s is readying the tool for Redstone 5 (RS5). We know that Windows 10 build will come in the fall of this year. It is currently being tested through the Skip Ahead branch of the Windows Insider Program.

A new Settings page on a recent Redstone 5 preview details the Cloud Clipboard. The inclusion suggests Microsoft is preparing it for a fall release. Clipboard allows Windows 10 users to copy content from one app and paste it onto another on iPhones or Android smartphones.

The Settings page suggests Cloud Clipboard will work in Automatic Mode. In other words, all content you choose to copy will be synced automatically. However, there will also be a manual mode. Users will also be able to choose from a list of devices for which will receive the content.

It seems the clipboard has been more complicated than Microsoft first realized. Indeed, it seems unlikely the company planned for nearly two years to pass before its launch. Maybe preparing apps like the Microsoft Launcher to underpin the clipboard was not easy.

Microsoft has been sending out Redstone 5 previews since early February. Currently in early previews, the build should kick into full testing once the Spring Creators Update is launched.

Microsoft is expected to finalize Windows 10 Redstone 4 next month as its spring 2018 update. These days, the company released Windows updates twice yearly with new features. The platform is then supplemented through monthly security and improvement patches. Redstone 5 will be the second feature update of 2018.