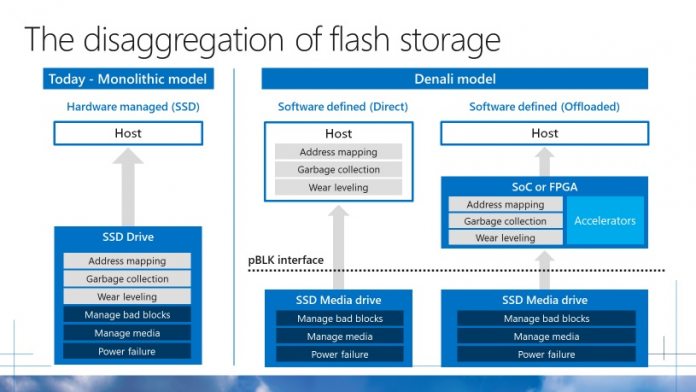 Microsoft was at the Open Compute Project (OCP) U.S. Summit 2018 this week and took the wrappers off Project Denali and Project Cerberus. The company describes Denali as an industry standard for datacenter hardware storage and security.

With Project Denali, Microsoft has created a next generation specification that standardizes SSD storage in data centers. The platform delivers detection and recovery tools and hardware protection from attacks.

“Fundamentally, Project Denali standardizes the SSD firmware interfaces by disaggregating the functionality for software defined data layout and media management. With Project Denali, customers can achieve greater levels of performance, while leveraging the cost-reduction economics that come at cloud scale.”

At the Open Compute Project (OCP) U.S. Summit 2018, Microsoft also talked about Project Cerberus. This is the company’s push to create an industry standard for security that is open source.

“Project Cerberus is a security co-processor that establishes a root of trust in itself for all of the hardware devices on a computing platform and helps defend platform firmware from:

The new project is comprised of a cryptographic microcontroller that runs secured code to intercepts accesses coming from host to flash on the SPI bus. This allows Cerberus to constantly measure and assess the accesses to decide if the firmware is secure and protect against unauthorized access.