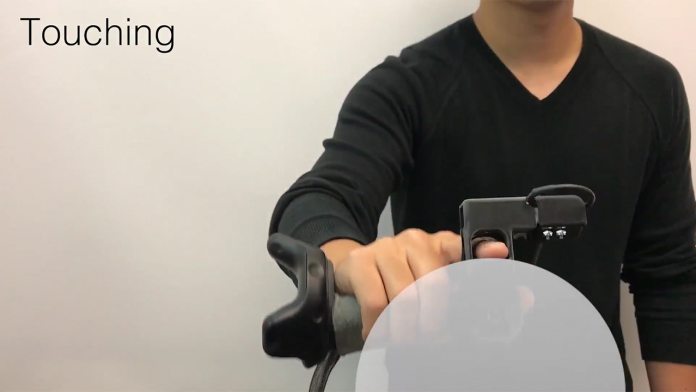 Virtual Reality headsets are coming along nicely, with good FoV, 3D, and sensor capabilities. They give a feeling of immersion like nothing else, but that can be quickly broken by clumsy control methods.

Companies have tried to solve the control issue via basic controllers and front mounted sensors, but both have a major problem. When playing in VR, the user doesn’t have a sense of weight to their actions. Firing a gun doesn’t have recoil, and hands often clip straight through objects.

However, a fascinating project out of Microsoft Research hints at how the industry can overcome such limitations. CLAW is described as a “multi-functional handheld haptic controller” and it’s like nothing we’ve seen before.

The bulky device consists of a handle and a loop, making for a pinch-like grip with real pressure behind it. When the user’s finger runs into an object, it will stop it, allowing them to feel its shape.

When pinching, users will get the feeling of a physical object they can lift, with differences in texture noticeable via subtle vibrations. The functionality extends to the softness of objects, giving some more give than others.

However, the focus for many will be the CLAW controller’s gunplay. The controller’s features can be combined to provide the feeling of a trigger press, as well as recoil. It was created with the help of Inrak Choy, an intern from Stanford University, and uses a servo motor and voice actuator to achieve its results.

The controller is still a work-in-progress and is currently quite large and bulky. It’s possible the device will never make it to market, but it’s a great example of creative problem solving and the direction control devices could head in.