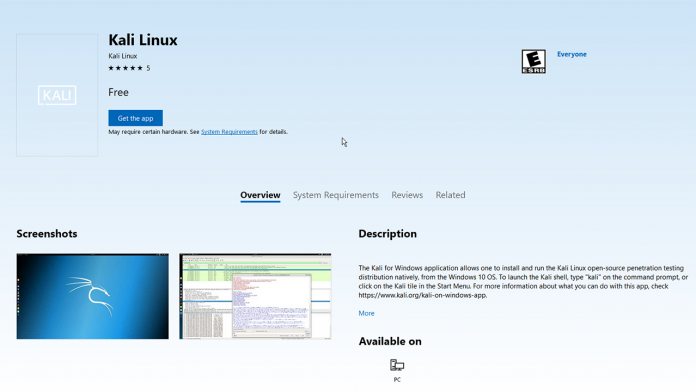 In a brave and somewhat unexpected move, Microsoft has made Kali Linux available in the Microsoft Store. The OS is widely used for penetration testing and security audits, essentially helping users to hack various systems.

Kali Linux can be downloaded by any as Linux environment via the Windows Subsystem for Linux. To use Kali, users will first have to download that by typing Windows Features and ticking the relevant box.

Unfortunately, the install of Kali Linux may be a problem for some users. The OS is used for forensics and reversing, but it’s also used for hacking. Windows Defender detects some of its components, including Metasploit, as Hacktools and trojans.

Until Microsoft fixes this issue, users will have to turn off real-time protection. This could significantly decrease the security, so it’s not necessarily recommended.

Even so, it’s great news for those looking to get into the industry. Though you can run Kali from a flash drive, this greatly simplifies the process and means users won’t have to reboot or partition.

“While this setup of Kali on Windows is not optimal due to various environmental restrictions (such as the lack of raw sockets and lack of customized Kali kernel), there are still many situations where having Kali Linux alongside your Windows 10 machine can be beneficial,” says Kali Linux creator Offensive Security.

However, while it’s not necessarily the best way to about things, it does highlight how far Microsoft has come. The company has always been seen as rivals to Linux, thanks in part to some negative press from Steve Ballmer.

In recent times, the company has turned things around under the ‘Microsoft loves Linux’ banner. It’s made many of its tools available, sponsored open source development, and released the Ubuntu terminal. This release is a continuation of that change in philosophy and will be greatly appreciated by many.