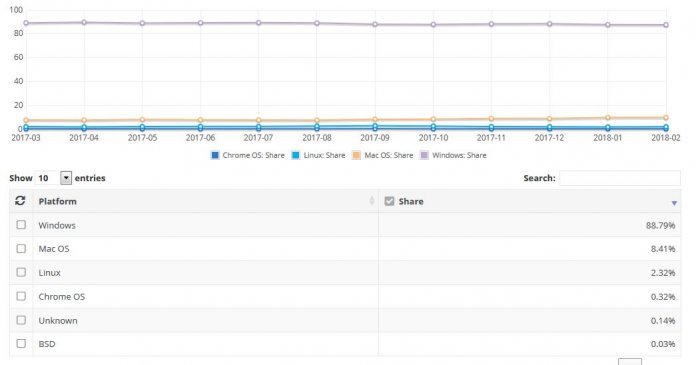 Microsoft has been rolling out the Windows 10 Fall Creators Update since last October. However, while the company recently finished the roll out, it has not helped Windows 10 to increase market share. The latest data from NetMarketShare shows Windows 10 actually lost market share during February.

The market watching firm says Windows 10 declined from 34.29% to 34.06% last month. Everyone now eligible to upgrade to the Fall Creators Update can now download the update. While Windows 10 remains low on fragmentation, there seems to be a slowdown of people adopting the new platform from older Windows versions.

In some ways, Microsoft is in a race against time. Windows 7 remains the most used Windows platform with a sizeable 41.61% market share. The company will end support for the Win7 in 2020, so by then most people will need to be running Windows 10.

In other words, the 42% using Windows 7 will be running an obsolete platform in two years unless they upgrade. Microsoft’s job will be converting those people to Windows 10 users. Windows 7 is declining, but at a very slow rate.

Of course, Microsoft does not have to worry about its position as the dominant software provider on desktop. Windows is running on 87.66% of all PCs, although Apple’s MacOS enjoyed a small market increase from 4.46% to 4.96%.

Still, it is clear Windows 10 adoption is slowing. That 87.66% market share for all Windows versions is Microsoft’s smallest lead for several years, down from 87.79%. NetMarketShare shows that Windows has been in decline for at least a year.

At the start of last year, Windows was on 89.03% of all PCs but has been losing share month-on-month since. Microsoft is unlikely to be concerned about its position overall, but the company will want Windows 10 adoption to pick up with the launch of Redstone 4 this month.