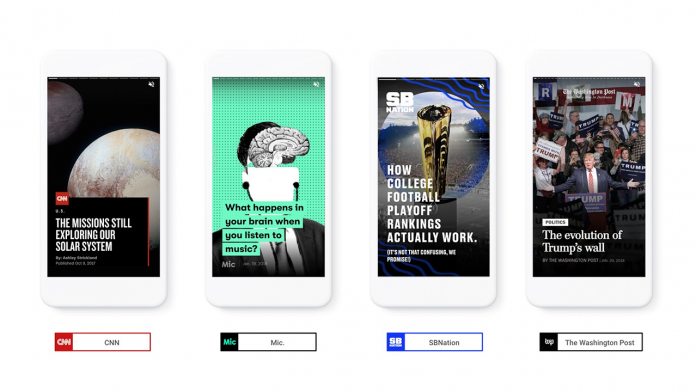 We’ve seen a number of apps emulate Snapchat’s story feature, including Facebook, Instagram, WhatsApp and Microsoft’s Skype. It was only a matter of time before Google did the same, though it takes a slightly different format.

With its upcoming AMP Stories, the focus is on publications. The feature will fit right into its mobile search to provide visual news in an easily digestible format. So far, it’s partnered with CNN, Conde Nast, The Washing Post, Vox Media, Wired and more.

“Some stories are best told with text while others are best expressed through images and videos. On mobile devices, users browse lots of articles, but engage with few in-depth,” explains Google. “Images, videos and graphics help publishers to get their readers’ attention as quickly as possible and keep them engaged through immersive and easily consumable visual information.”

Publishers can create and host the content via HTML, with a number of flexible templates, standardized UI controls, and more. Once it’s hosted on their site, users can view it on both mobile and desktop. The idea is to make story creation as hassle-free as possible while providing a rich and intuitive experience for users.

It also doesn’t support advertising, meaning publications won’t be getting paid for their content just yet. Even if it does, it’s hard to say if companies will adopt it, given the resources required to make such a story. It’s definitely easier than making a video, but publications will likely see a bigger return from traditional slideshows.