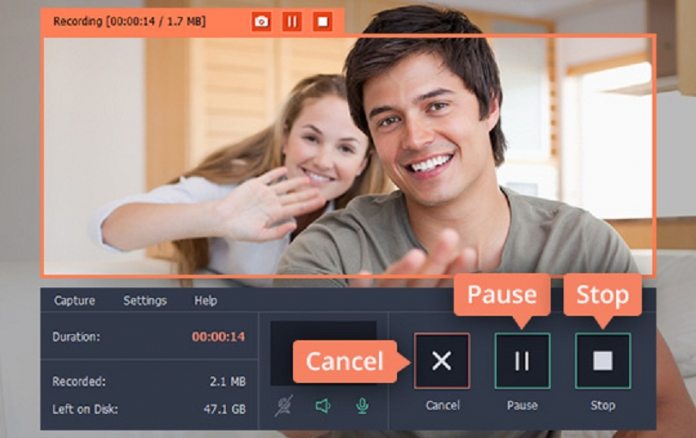 Technically speaking there are several ways to record conversations on Google Hangout on your Windows PC, including using YouTube Live or Windows 10’s ‘Game Bar’. The former does take a while to set up however, while the latter has several limitations – most notably the fact that it will record the entire browser window as if it was a game.

Rather than opting for either of those methods, you could use Movavi Screen Recorder instead. As a screen recorder it is capable of recording any video footage that you need from your screen, including Google Hangout conversations. More importantly it can be set up quickly and the recording parameters can be fully customized.

To use Movavi Screen Recorder as a Google Hangouts recorder, first you should launch the software and immediately use your mouse cursor to draw a frame that encompasses the area where the conversation will be. If it isn’t that accurate you can adjust the frame by resizing or repositioning it, or you could select one of the presets in the list under the ‘Capture Area’ section of the interface. On Movavi Screen Recorder’s interface you’ll also see a ‘System Audio’ and ‘Microphone’ icon, both of which should be highlighted if you want to record the incoming and outgoing audio. If one or the other is not, click on it to highlight it. Beside each icon there’ll be a slider that you can use to adjust the volume level. That is really all that needs to be set up, and you can start the Google Hangout conversation and press the ‘REC’ button on the interface to start recording.

At any time you can click ‘Pause’ to stop recording for a short while then resume later, or ‘Cancel’ to simply stop recording and not save any of the footage. In any case when you’re done you can click ‘Stop’, and Movavi Screen Recorder will automatically save the recorded Google Hangout conversation as an MKV video file.

After you click ‘Stop’, a ‘Preview’ window will appear that you can use to review the video footage that was recorded. If you want you can remove any parts that you don’t want, by moving the marker and clicking on the ‘scissors’ icon to split the footage.

Once you’ve isolated the part that you want to remove, click to select it then click on the ‘trash can’ icon to delete it. If you want to save any changes you’ve made or would like to save the Google Hangout conversation in a different format, click ‘Save As’. That will open up a window where you can select the format and video settings, then click ‘Save’ so that Movavi Screen Recorder saves your video. As you can see it is easy to set up Movavi Screen Recorder in this fashion, and if you want you can adjust the other recording parameters such as the frame rate, or set it to capture keyboard and mouse actions. Assuming you just want to record a Google Hangout conversation that isn’t necessary however, and the steps above should more than suffice.