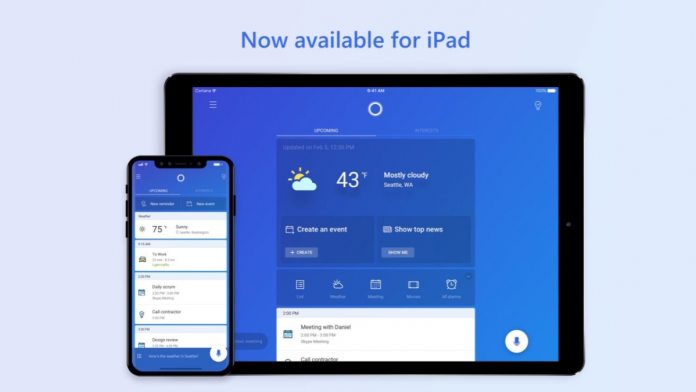 Microsoft is all about mobile apps across platforms these days. The company no longer adds new features to Windows 10 Mobile and has transitioned into a purely mobile software company. Love it or hate it, the situation means you get apps like Cortana on Android and iOS.

Speaking of the virtual voice assistant, Microsoft has today debuted the app on Apple’s iPad. This is the first time Cortana has been available on Cupertino’s tablet format.

Sure, this isn’t huge news as users get the same core experience they would have on an iPhone. Cortana has been on Apple’s smartphone for years and iPad users have been able to download that version.

However, by bringing an official iPad version, users now have Cortana formatted for their device. In other words, the app now looks high-quality and fits to iPad screens.

To ensure the assistant works well on the devices, Microsoft has made some UI tweaks for the larger screens.

It is probably no coincidence that Cortana comes to iPad just weeks after Microsoft made performance enhancements to the iOS app. The company said she now launches 20% faster. Microsoft pointed out this was a noticeable difference.

The news also comes a week after Microsoft CEO Satya Nadella recommitted the company to Cortana. Fans had been concerned that the company would turn its back on the service. Perhaps its expansion to iPad shows Microsoft’s commitment to voice assisted technology.

Nadella says the reason he works with Amazon is because he believe Cortana can hold its own: