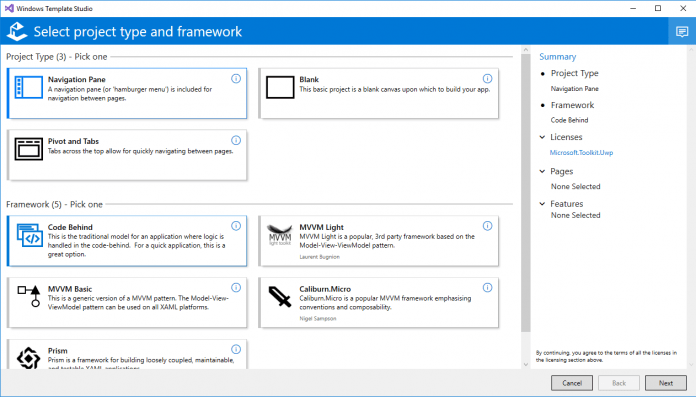 Windows Template Studio took a big step forward with version 1.6 at the end of last year. Version 1.7 is now available, and it may be an even larger upgrade.

For the unfamiliar, Microsoft’s app helps developers create UWP apps with Visual Studio via a detailed install wizard. It lets users get a basic framework up very quickly, saving time for even the most experience.

The latest update brings a ton of new functionality, including a highly-anticipated one: support for the Visual Basic language. Here’s the full list of changes:

The Prism support was something the team began work towards in 1.6, so it’s great to see that making an appearance. Of course, the under the hood stability fixes are just as important as the new functionality.

With those out of the way, Microsoft can work on features for its next version. Firstly, the plugin will be getting some much-needed interface improvements in-line with Visual Studio.

The team will also be working to refine the template’s Fluent Design elements, as well as Inking. Users will also be able to create multiple projects in a single solution, and will notice an improved right click>add support menu.

You can find more about the app on the Windows blog.