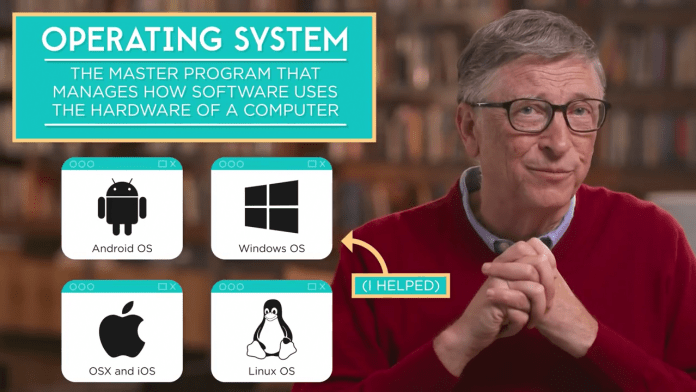 There are few as qualified to teach computing as Microsoft co-founder Bill Gates. Among other figures, he’s taking part in Code.org’s ‘How Computers Work,’ series, explaining the process of the course.

“Everywhere you look, computers are changing the world,” says Gates. “Whether they’re on our desktops, in our homes, our pockets, or just about anywhere else. But while most of us use this revolutionary daily, we don’t often ask: How do computers work?”

He goes on to explain the content of the series, from binary to circuits, hardware components, and code.

Microsoft has previously collaborated with Code.org with its Minecraft coding tutorial, which seeks to spark technical creativity in young children.

Another Microsoft representation comes in the form of Jerome Holman, a “Senior Program Manager at Team Xbox” who awkwardly left for Occulus this month. With Minecraft in the background, he explains the interaction between software and the CPU.

Bill Gates then makes another appearance, giving a very fitting explanation of how the OS interacts with all this hardware.

“Computers have the potential to do all kinds of amazing things, but the only thing that makes computers smart or useful is you. When you learn to code, you get to define the problem you want to solve and write the software that turns those ideas into reality,” finishes Gates.

“That gives you the power to build things that matter to you, your community, and the world.”

You can watch the full series for free on YouTube.