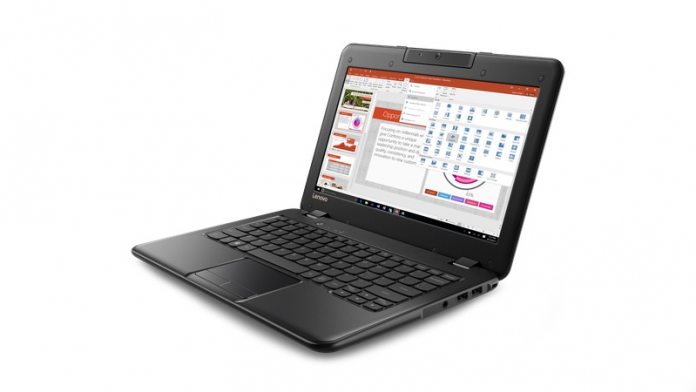 When Google emerged with the Chrome OS and Chromebooks, Microsoft decided to move aside. The Chrome ecosystem is perfect for education users and affordable. However, it is not without issues, such as needing to be always connected. Only over the last 18 months has Microsoft decided to take the fight to Chrome.

Windows 10 S was a major step towards Microsoft stealing back the education market. Since then, more features and hardware have emerged, the latter matching the affordability of Chromebooks. Doubling down, Microsoft is this week revealing new Windows 10 S devices that start at just $189.

The company is at the Bett education show in London to debut the hardware. PC giant Lenovo is the manufacturer behind the $189 laptop, which is called the 100e. Thise device is already on Chrome OS and is now coming to Windows 10 S. It has Intel Celeron Apollo Lake silicon so is definitely entry level. Lenovo also has the 300e, a 2-in-1 which features pen support and gets a price tag of $279.

JP is also in on the affordable Windows 10 S action. The company released the Windows Hello laptop for $199 and a $299 model with pen and touch support.

All devices will help Microsoft’s push back against Chrome OS. Arguably more important are new collaborations with LEGO, NASA, PBS, Pearson, and BBC on Windows Mixed Reality and video content for schools. Google may be way ahead in education, but major organizations are clearly willing to get behind Windows 10 S.

For example, BBC Worldwide will release Oceans: Out Blue Planet film in museums during March. The documentary will come to education institutions after and will be available on Windows 10 S. LEGO is teaming with Microsoft to give students tools to match LEGO bricks to measure topography for 2D and 3D models.

Additionally, Microsoft announced it will soon release the Chemistry Update for Minecraft: Education Edition. Arriving this spring, the update will allow users to build chemical compounds and will be free to download.