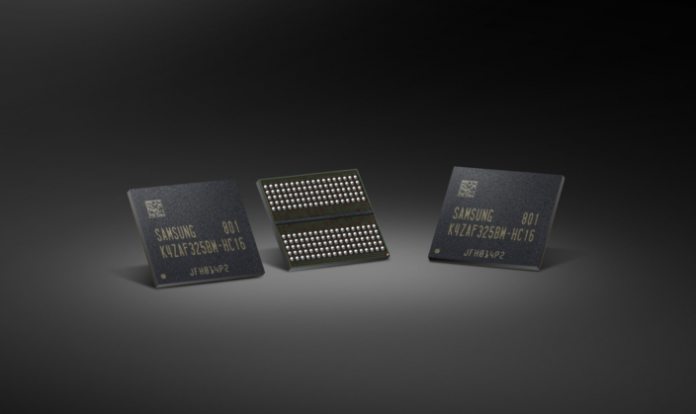 The hardware component market is forever changing and the competition is on to make the best and fastest technology. Graphics memory is one area where the race for latest and greatest is heating up. Samsung appears to have taken a significant lead with the announcement of new GDDR6 memory chips.

Samsung is moving ahead of the competition with its latest advancements in GDDR6 and HBM2. In a press release today, the South Korean company confirmed its new GDDR6 memory chips are now in mass production.

This has been a quick turnaround considering Samsung only announced the chips at CES earlier this month. As the market is fast moving, the company clearly wanted to ramp up to full production quickly.

Samsung’s ability to swiftly move into mass production will harm its competition. Micron and SK Hynix both have GDDR6 RAM alternatives, but both those will not start production until late in the year. That means Samsung is moving in front of the market with the first 16GB GDDR6 memory chip.

“Beginning with this early production of the industry’s first 16Gb GDDR6, we will offer a comprehensive graphics DRAM line-up, with the highest performance and densities, in a very timely manner. By introducing next-generation GDDR6 products, we will strengthen our presence in the gaming and graphics card markets and accommodate the growing need for advanced graphics memory in automotive and network systems.”

In its release, the company reconfirmed the chip will be manufactured on a 10nm process. It will run at 1.35V and deliver blazing speeds to 18Gbps pin speed. The new hardware will achieve transfer rates of 72Gpbs, an increase from 64Gbps at a density of 16Gb.

Samsung is taking the lead in terms of production and technology. Micron’s new memory chip will manage about 12Gbps, while SK Hynix’s effort will get to around 8 to 16Gbps.

“Samsung’s immediate production of GDDR6 will play a critical role in early launches of next-generation graphics cards and systems. With all of its improvements in density, performance and energy efficiency, the 16Gb GDDR6 will be widely used in rapidly growing fields such as 8K Ultra HD video processing, virtual reality (VR), augmented reality (AR) and artificial intelligence.”