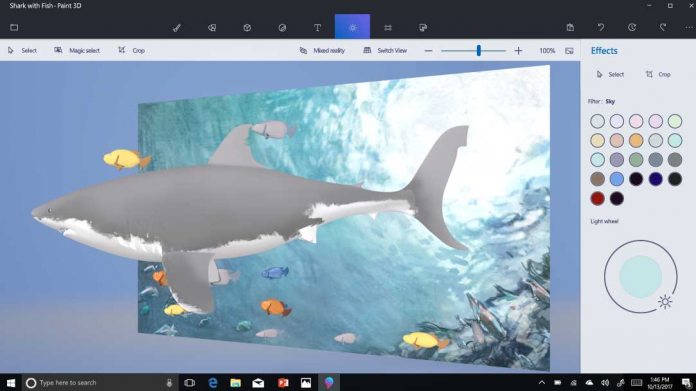 Microsoft’s Paint 3D software for Windows 10 was launched alongside the Creators Update last April. As the modern MS Paint replacement reaches a year old, the company has some new features in store. One is a powerful new tool called Free View, which will boost the program’s editing features further.

When launched, Paint 3D was a content creation tool that allows users to build 3D models and interact with them in various ways. The software already comes with numerous editing abilities, but Free View still feels like an important step.

You may be thinking Paint 3D already has a free view. That is correct, it allows users to view their 3D creations from all angles with mouse and touch. However, if you want to edit something you spot in free view, you need to go back to the main regular view of the app.

This is counter-intuitive because it is sometimes hard to find the position of the object you want to edit when switching between view modes. According to WalkingCat, the new Free View will be more powerful. It will let users edit their models directly in the free view mode, from any angle or position.

As you can see in the video above, Free View allows the user to move around their 3D creation. It comes with a selection tool that can be used for resizing objects.

Microsoft clearly wants Paint 3D to be more useable. The company is heading deeper into mixed reality development through Windows Mixed Reality and Paint 3D could be a powerful tool for creators.

The company continues to add functionality to the app to boost its usefulness. Like Magic Select, Free View is a powerful new addition that will give users more freedom and accuracy in the creation and editing processes.

Free View is currently in development and is almost certainly going to be unveiled alongside Redstone 4. The next major update for Windows 10 will arrive this spring. In fact, just in time for Paint 3D to celebrate its first birthday.