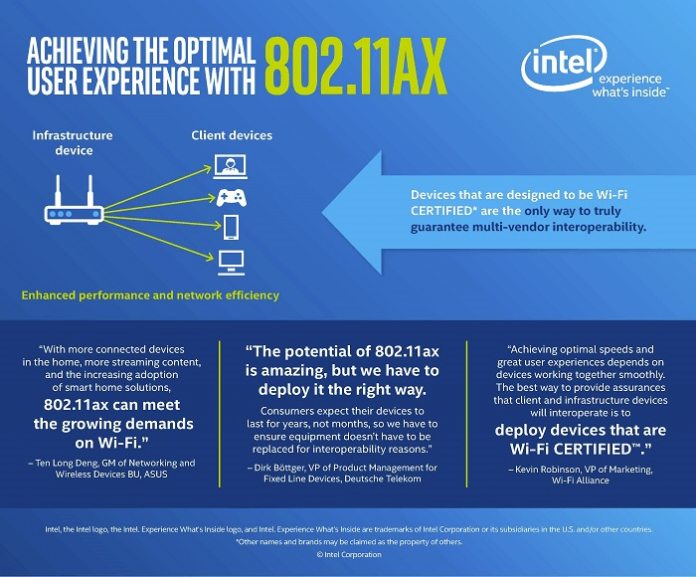 During February 2017, Qualcomm unveiled its 802.11ax processors that delivered the next generation of Wi-Fi performance. Almost a year later at CES 2018, Intel has announced its own 802.11ax chips.

IEEE 802.11ax is a wireless standard specification designed to boost the performance capabilities of LANs. While Intel is later to the party than Qualcomm, the standard will not be signed off until this year. Qualcomm was well ahead of the curve, but Intel is arriving just at the right time.

Intel’s chipsets will deliver faster Wi-Fi to consumer devices and 2×2 and 4×4 gateways for cable xDSL, home routers, and fiber. According to the company, the chips will vastly improve connectivity:

“There’s good reason for the industry’s enthusiasm about 802.11ax. The new standard will offer significant improvements over its predecessor, 802.11ac. It’s expected to deliver up to 40 percent higher peak data rates for a single client device and improve average throughput per user by at least four times in dense or congested environments.”

Intel based its 802.11ax chipsets are built on Draft 2.0 of 802.11ax. However, the company is building in its own improvements to the standard and believes it can increase performance even more.

To make the transition more efficient, Intel says it chipsets will allows OEMs to easily update from 802.11ac to 802.11ax. This will be done without needing to change to the host SoC.

The 802.11ax home Wi-Fi chips are designed to allow up to 256 connected devices on the bandwidth at the same time. Intel says they will maintain consistent connectivity the more devices that connect to a router.

At CES 2018 this past weekend, Intel introduced the first 8th gen Core i5 and i7 chipsets with integrated Radeon graphics. The announcement follows the decision by the two rivals to collaborate.