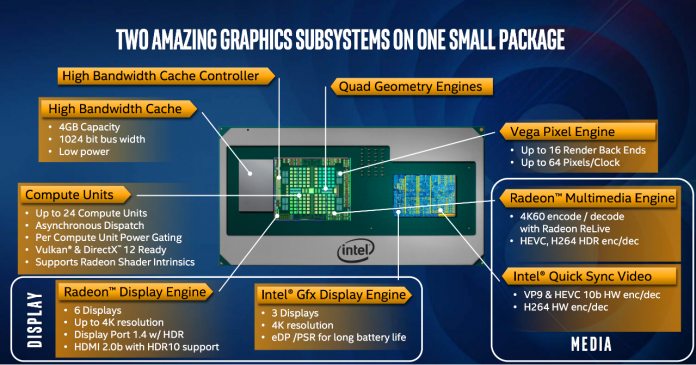 It hasn’t been a good start to the year for chip giants Intel and AMD thanks to the Meltdown and Spectre vulnerability. However, this week is CES 2018 and the companies can turn to more positive announcements. At the Las Vegas event, Intel announced new processors made in collaboration with AMD.

The product introduction comes months after Intel and AMD stunned many with news of a collaboration. Both companies are arch rivals, but the collaboration would combine Intel’s Core processors with AMD’s Radeon graphics.

Leaks for the newest 8th Generation Core processors dropped last week, but now we have something with an official stamp. The Intel and AMD 8th gen Core chipsets fall into the H series of processors.

Intel says the range will deliver improved performance without forcing manufacturers to compromise design. In other words, the ultra-thin and premium look Windows laptops have adopted in recent years will remain.

The partnership has allowed Intel to integrate AMD’s Radeon RX Vega M GPU onto its Core i5/i7 CPUs. Intel was able to achieve this with its EMIB technology, which results in silicon that is 50% smaller but managed significant performance gains. RAM support is also better with 4GB of high bandwidth memory (HMB2).

With this integrated release, we should be seeing more powerful PC products arriving this year. Not only that, it will be interesting to see where manufacturers go with design. We expect to see some ultra-thin devices taking advantage of this smaller silicon footprint.