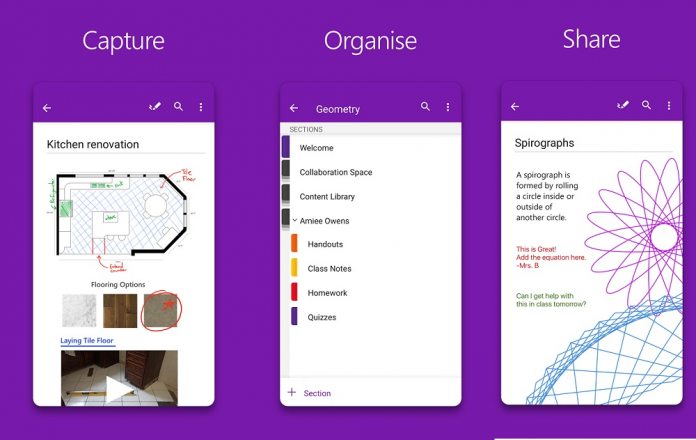 Android users running Microsoft’s OneNote app should be seeing a new update starting today. The latest release of the note taking app makes a few changes. Among them is Office Lens integration and a new interface that can be accessed through the app button.

In terms of Office Lens, OneNote on Android is now fully integrated with the document editing tool. Office Lens gives users tools to trim, enhance and make images of whiteboards and docs. The service then saves the content into Microsoft’s OneNote app. Images can be converted to PDF, PowerPoint, and Word files.

With integration with OneNote, users will be able to perform Office Lens tasks in the note-taking app. Microsoft initially brought this feature to the service in November, but it was limited to preview.

Moving away from Office Lens integration, Microsoft has also made the OneNote on Android app button more useful. Provided you are running Android 7.1 Nougat or newer, you will now see actions behind the app icon.

Holding the OneNote icon opens a small pop-up menu that offers basic app functions. Among them is the ability to create different kind of notes quickly. This could appeal more to users than the floating quick note icon that can currently be used on an Android home screen.

Microsoft has also made other tweaks to OneNote for Android, to check out the changelog below. You can also install or update the app from the Google Play Store here.