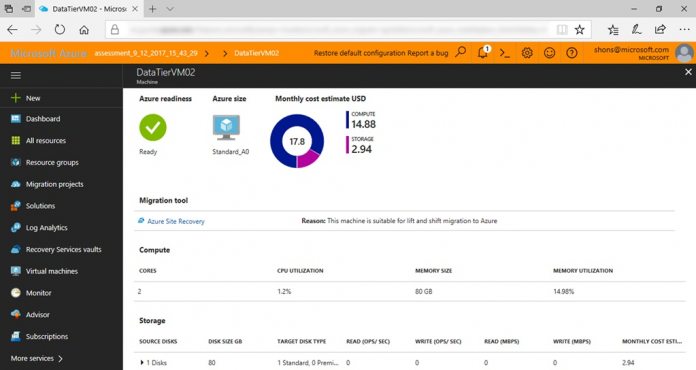 Microsoft has confirmed it is finalizing the Azure Migrate ability that will launch during the first half of 2018. The feature will allow customers to move virtual machine (VM) applications and workloads to Azure datacenter.

The announcement was made recently by Corey Sanders, director of program management for Azure Compute. Sanders was speaking at a webinar presentation titled “Running VMware on Azure”, which is available on demand now.

Users don’t have to wait until 2018 to get their hands on the new Azure Migrate. Microsoft has already opened it as a free preview. It is also worth noting that the company first introduced the feature back in September. Sanders simply offered some official confirmation on when general availability will arrive.

For the record, that will be “H1 of the next calendar year” according to the executive. Sanders described Azure Migrate is an important cog in Microsoft’s VM management plans. The company wants to give customers more control over estimating monthly costs and risk assessment for moving VMs.

Organizations struggle during migration to the cloud. Microsoft wants to provide more visibility by providing more information about migration paths. This allows customers to understand connected applications, data, and workloads.

With Azure Migrate, organizations can move VMs with little impact on business operations. Microsoft says the main abilities of the feature are as follows;

Back in April, Microsoft announced new migration tools for Azure. Cloud Migration Assessment is a free tool. It gives organizations the tools to discover server and hardware reports. The feature provides a cost report so customers can better manage their cloud finances.

Azure customers can now use Azure Hybrid Use Benefit directly from the Management Portal. Another effort to help users cut costs, Microsoft said organizations can save 40% on Windows Server licenses.

The last new solution is called Azure Site Recovery. It resolves issues when customers already have virtual machines locally or with a different provider. Users can migrate VMs from AWS, VMWare or Hyper-V to Azure.