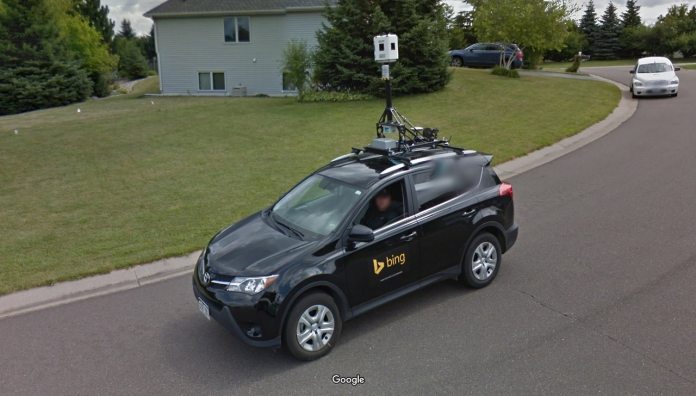 What happens when a Google Street View car meets a Bing one? It sounds like the beginning of a poor joke, but we now have the answer.

Thanks to the detective work of a Tumblr user, images have come to light that show the two crossing each other on the job. Taken in July 2014, they aren’t particularly groundbreaking, but they do hint at a difference between the companies.

While Google simply left its competitors car as is, Bing logo and all, Microsoft tried to erase it from existence. In the place of the car, there’s an ugly white rectangle with a camera sticking out of the top.

There are many explanations as to why the two acted differently, but one is company culture. Microsoft has traditionally been seen as a more closed-source and competitive. The phrase “embrace, extend, and extinguish” has been used internally in the past.

In recent times, the company has made efforts to change that image. CEO Satya Nadella has embraced Linux, open-sourced many projects, and even partnered with Amazon.

However, it’s also come under considerable fire from Salesforce and the EU for its $26 billion acquisition of LinkedIn. They allege that Microsoft’s new dataset of 500 million professionals allows for anti-competitive practices.

That concern has been somewhat well-founded, with LinkedIn recently taking HiQ Labs to court for using its publically accessible data for free.

Some will see the censorship of Google’s car as further evidence of Microsoft’s anti-competitiveness, but it’s easy to see why it would do so. Google is far ahead in the mapping space, with more features and more users than Bing. Reminding someone they can use Google Streetview likely isn’t something the company wants. It’s much easier to act unconcerned when you’re at the top, and Alphabet isn’t exactly saint-like, either.

But there’s also a much more simple explanation. Google didn’t notice the Bing car. It’s easy to miss a few images out of hundreds of thousands, especially when much of Google’s work is automated.

Perhaps it’s better to simply leave it a mystery. Instead, enjoy the Google driver’s friendly wave, completely unaware that he’ll be wiped from existence.