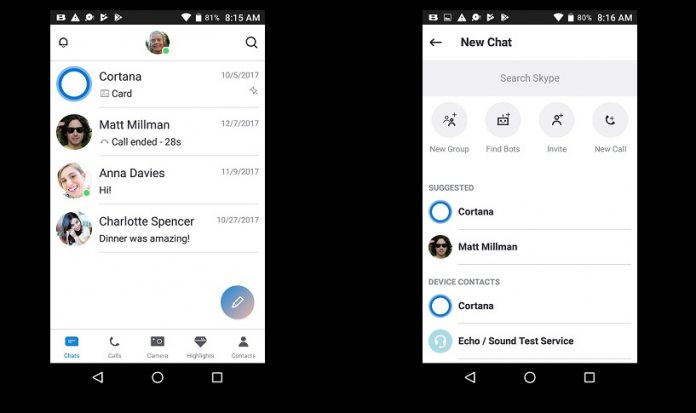 Microsoft is showing some love to Skype Insiders on mobile devices today. The company says it is expanding its recently announced iOS redesign of the app to Android. Additionally, Insiders on the two leading mobile platforms can now test a new feature Microsoft calls “SuperComposer”.

Starting with the new design, Android users will see the UI tweak through Skype version 8.13. As mentioned, this is only available to Insiders at the moment, but will come to all users soon. Just like the iOS release 10 days ago, the new design changes introduce a new menu bar and slimmer headers.

The focus of the tweak is to make the Skype experience more fluid on mobile devices. Microsoft completely overhauled the communication platform in the summer, bringing the biggest change in over a decade.

However, on mobile the changes were roundly criticized. Microsoft has been fiddling with the design since to create a smoother UI. In terms of this latest tweak, the company has reintroduced a bottom bar that makes accessing core features simpler. As on iOS, the chat headers have also been on a diet, offering more screen real estate for text.

Microsoft says many Android users requested the same treatment as iOS. In response, Microsoft has issued build 8.13 on the Inside. It comes with the following design changes:

Positive design changes are nice, but what we all want is new features. Microsoft has Android and iOS users covered (forget about it Windows 10 Mobile users) with SuperComposer. This new Skype addition provides easier access to contacts and information when composing a messages.

When selecting compose, a new screen will appear that shows recent contacts. There is also quick access to features like search bots, add contact, invitations, making a call, and new group.