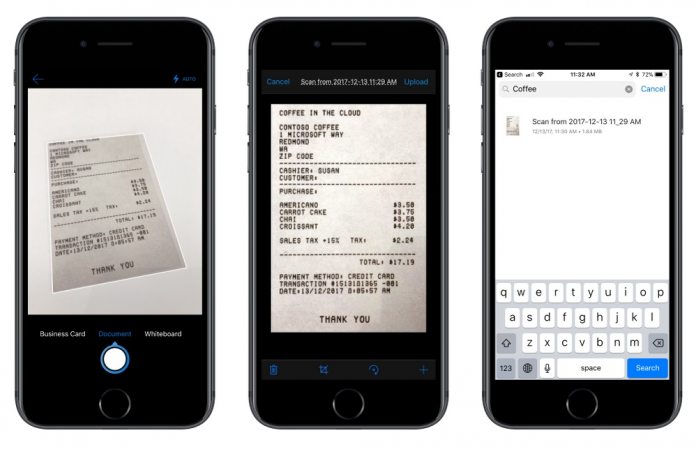 Microsoft has previously discussed its technology using artificial intelligence to detect images uploaded to its apps. The AI can scan and image and detect written and drawn content, and more. Today, the company has expanded the abilities for OneDrive to detect images intelligently.

The cloud storage application will now analyze and extract text from images automatically, making them searchable. With its technology, Microsoft apps can detect what is in an image, whatever object it may be.

“While at a restaurant, snap a photo of the receipt. You can do this directly from the OneDrive mobile app, Office Lens mobile app, or just upload a photo you’ve taken with your device. Later on, when you go to file your expenses, you don’t have to remember where you stored it, but instead can search for something that you remember about the expense, for example ‘sushi’ or a location.”

The new search capabilities are part of wider AI features coming to Office 365. Basically, the computer vision technology extracts text data from images and allows users to search. As well as integration with OneDrive, the ability also comes to SharePoint and Office.com.

If you take an image with text that you want to use later, finding the image will be easier. For example, travel ticket information that was saved as an image months ago. Instead of looking through your images, you can just search for text, such as the travel location.

As is usually the case, the ability is making its debut in English. No other languages are currently supported. Microsoft says in the future it will look to add an automatic translation ability depending on the application.

“Text extracted from an image is in the language captured from the image and is searchable in that language.”