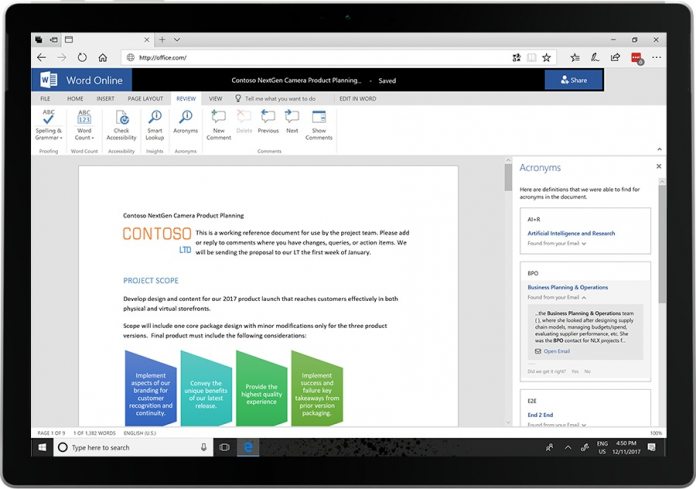 Microsoft is doubling down on its artificial intelligence (AI) with several big announcements today. Among them are AI integrations for the Microsoft Office productivity suite. Word, Excel, and Outlook on Office 365 are getting new features powered by AI. Cortana is also scoring some new AI features to make the assistant more efficient.

The company is pushing artificial intelligence across many of its core products, bringing AI solutions to even casual users. In Excel, Microsoft has sent out a preview of its Insights feature. The company says the tool can “automatically highlights patterns it detects, which makes it easier for everyone to explore and analyze their data.”

As a preview release, Insights will be coming to the Office Insider Program. However, users will have to wait until later this month for the feature to make its debut.

Word is also getting some AI treatment, in the form of the feature called Acronyms. Using machine learning techniques, the app can now “help people understand shorthand by leveraging the Microsoft Graph to surface definitions of terms that have been previously defined.”

Word Online will get Acronyms first in Office 365 commercial, although not until early in 2018. Microsoft says the feature works on scanning emails and documents.

Microsoft also showered some AI love into Outlook. Specifically, the iOS mobile version of the email app is now integrating with Cortana. The virtual assistant will help notify Outlook users when it is time for an appointment. Other notifications Cortana will surface include transit directions and arrival times based on location.

Cortana is getting some specific artificial intelligence features. Namely, she will soon be able to chain skills together, helping to make interactions more efficient and natural. Microsoft offered an example of booking tickets through Cortana, with the assistant automatically also putting the event date into the calendar.

AI in Cortana will also allow summaries of most important emails. Microsoft has not said when the Cortana features will arrive, but we expect early in 2018 or maybe with Windows 10 Redstone 4.