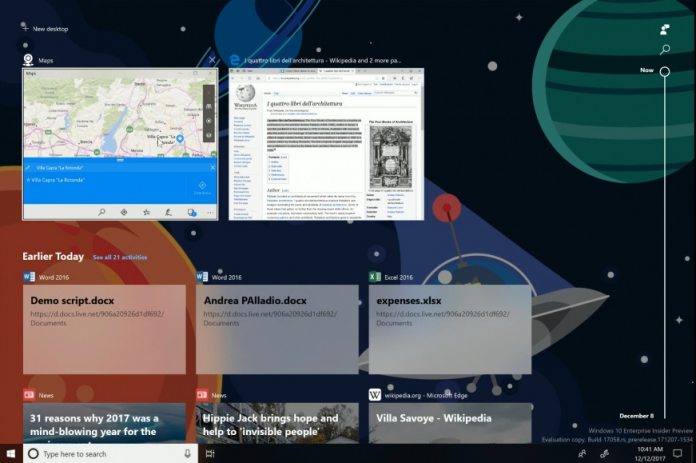 One of the most anticipated features for Windows 10 is Windows Timeline, something Microsoft has been working on for some time. The feature missed the Fall Creators Update, but has now been confirmed for a Redstone 4 launch. However, another anticipated feature called Sets will not make the next major update.

To showcase Timeline, Microsoft demoed the feature during yesterday’s Windows Insider webcast. The feature is expected to make its debut in upcoming Redstone 4 preview releases. Microsoft says the next Insider release will be coming on Thursday, although it is not clear if Timeline will be in the next release.

The live demo of Windows Timeline highlights some of the abilities of the tool. Timeline gives users in Windows 10 the ability to see what they are doing at a particular time. It is a PC version of Microsoft’s “Pick Up Where You Left Off” feature.

Opening the tool lets you see activity through past Windows 10 use, set out in cards for more efficient movement between apps. Microsoft plans to make activities dynamic across devices, allowing users to pick up any Windows 10 device and have a connected experience.

The demo showcased the Taskview icon, now sitting above the Windows Timeline space. Microsoft showed how the app will manage items, including card organization across 30 days. This is denoted through a main day view and a subview of hours.

Developers will need to update their applications to make them compatible with Timeline. So, while the feature will debut in an upcoming Insider build, there will be limitations. Microsoft will probably have its own apps ready, but third-parties will have to get on board. Hopefully, by time Redstone 4 morphs into the next Windows 10 build all developers will be ready.

Microsoft says Edge, News, Sports, Weather, and Maps apps are already prepped for Windows Timeline. It is also good to see that activities from Office applications across platforms are also included. Many users will also be happy to see data collection practices of the app can be turned off.