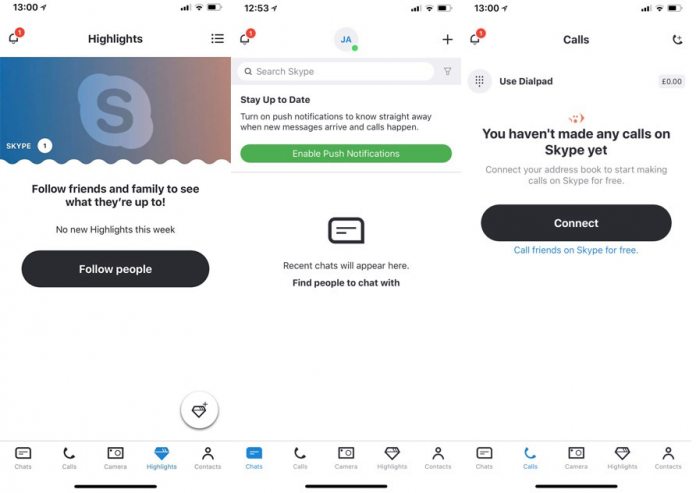 Skype for iOS has received a major update, with its new design available to new users, as well as support for the iPhone X. The improvements push the version to 8.12 and generally make the app more usable.

In terms of design, all iOS users will notice the elimination of the Pivot UI. Instead, a navigation bar allows quick access to chats, calls, highlights, camera, and contacts. It also brings notification badges in that new bar, as well as a notification screen and a bigger search bar.

It also makes tweaks to the messaging experience, which is vital on mobile. Chat headers are much slimmer, allowing more text to fit on screen. At the same time, they have presence indicators, showing when someone was last online. There’s also easier access to location, money, and image sharing.

In short, it addresses many of the issues with the previous redesign, which destroyed the app’s ratings. For a short period, it sat at just 1.5 stars on the App Store, thanks to slews of negative feedback. Those users should now be much happier with the app, though don’t expect a return to the old experience.

It’s been a while in coming, but this update finally adds Skype support for the iPhone X. For users, that means the application will be sensitive to the notch at the top of the screen. Instead of cropping the app to fit old iPhone dimensions, it will now fill the whole edge-to-edge display.

Other than that, you may notice some performance and reliability improvements. These are general and should be across the whole app, but they definitely aren’t life-changing. Either way, it’s a so

Either way, the update will be a big relief for iOS users who didn’t opt into the preview. You’ll want to grab it as soon as possible from the App Store.