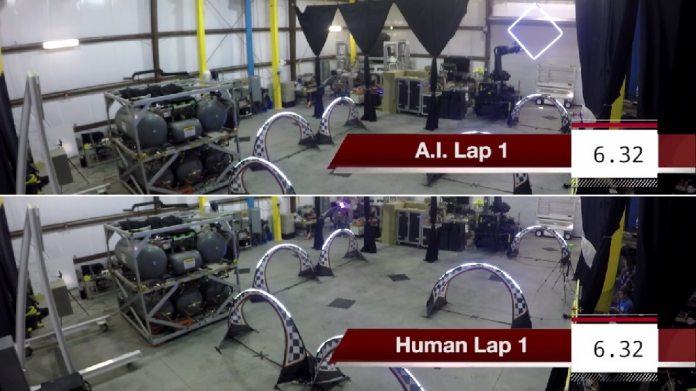 Around two years ago, I was flicking through channels and found drone racing. It’s amazing how people can control UAVs at such high speeds when I struggle to miss the next lamppost. However, machines can race drones just as well as people according to a new study from the NASA Jet Propulsion Laboratory (JPL).

NASA has described its findings in a press release. The US space agency says it allowed its artificial intelligence algorithms to compete against a human operator. Interestingly, it seems the AI was capable of a more fluid control style. Perhaps unsurprisingly, humans are more prone to more aggressive operating behaviour:

“We pitted our algorithms against a human, who flies a lot more by feel. You can actually see that the A.I. flies the drone smoothly around the course, whereas human pilots tend to accelerate aggressively, so their path is jerkier,” Rob Reid, the project’s task manager said.

The race was held on Oct. 12 as part of NASA’s drone autonomy research funded by Google. JPL researchers created their own vision-based AI. Originally designed for the agency’s space-faring vehicles, the algorithm can be applied to drones.

An obstacle course was laid out and professional drone pilot Ken Loo was drafted. While the AI was generally smoother, it could not beat Loo. That is probably not too much of a surprise, but the eyebrows to raise when we consider the AI was not much slower than the human.

Loo could achieve an average lap time of 11.9 seconds, while the AI took 13.9 seconds. Clearly, the evidence shows that AI may be able to take over all human-operated drone flights. At least those that are not recreational.

AI may be slower than humans, but the study found a machine is likely to be safer. The algorithm used by JPL was notably more cautious and consistent in route planning. Also, the AI would slow down to regain vision when excess speed resulted in blindness.

Arguably the most crucial factor is the AI never gets tired. Loo admits it was a tough task to navigate the course, while the AI would not have any thoughts and would just complete the task:

“This is definitely the densest track I’ve ever flown. One of my faults as a pilot is I get tired easily. When I get mentally fatigued, I start to get lost, even if I’ve flown the course 10 times,” Loo said in the press release.

It is also worth noting that the artificial intelligence will learn through usage. In other words, it could get faster and more efficient the more times it flies a route.

“Our autonomous drones can fly much faster. One day you might see them racing professionally!” Reid from JPL said in the press release.