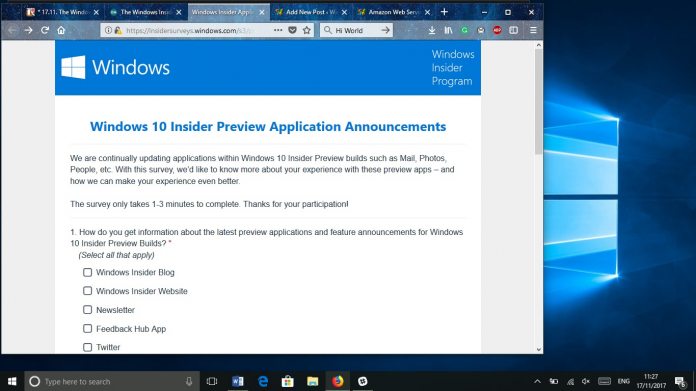 Microsoft has often said its Windows Insider Program is an enormous success. Millions of users have adopted the preview branch platform that allows them to test new feature ahead of RTM. In return, users are supposed to give Microsoft valuable feedback on builds.

However, perhaps users are not fulfilling their side of the bargain. Microsoft has published a survey to assess how they can surface new Windows app to Insiders in the future. Windows Insider Program members already have the Feedback Hub for this kind of reporting.

Perhaps Microsoft is concerned not enough Insiders are providing feedback, although this could just be the company adding another option. Either way, the survey asks users questions like how they get information about the latest builds. Whether they are happy with the information provided through each release.

“Windows Insiders running the latest Insider Preview builds have also been able to try out early versions of Windows apps like Mail and Calendar, Skype, Photos and People. In an effort to improve this experience, we’re asking Insiders to complete a quick survey.

The survey only takes 1-3 minutes to complete. As with all our surveys, the feedback you provide will not be will not be shared outside of Microsoft or associated with any personal information unless you choose to provide your Microsoft account email (MSA). Feedback from this survey will help us enhance the app preview experience with more timely app updates, more informative news announcements and other benefits.”

As I mentioned at the top of the article, Microsoft says the Windows Insider Program has been a success. There is certainly no evidence to suggest otherwise. Indeed, the model of allowing users to test upcoming release builds has caught on.