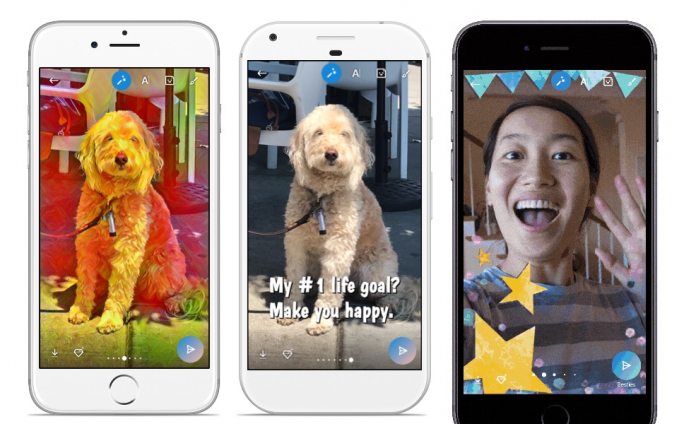 Microsoft’s controversial overhaul of Skype has been with us for a few months. While the company has had to put out a few fires, it has also been adding new features to the communication app. The latest new addition to the Skype experience are new photo effects.

Ok, woo, hardly something big. However, it is interesting because the addition once again brings Skype closer to Snapchat. The redesign of the platform threw in plenty of Snapchat references. Microsoft was wearing its creative inspiration on its sleeve and was aiming for a market Skype does not necessarily command.

The new photo effects are found in the Skype Highlights. The effects are described as “smart, whimsical effects, like quirky face stickers and witty captions.” Microsoft says the effects work with a front-facing selfie camera and the series rear snapper on a device.

With customized smart effects, users can see the results on the screen. Powered by Sprinkles by Microsoft, the effects take advantage of that app, which offers quick effects editing tools.

“With photo effects on Skype, you can easily add a dash of wit and creativity to your everyday moments,” Microsoft explains. “Share decorated photos with your friends and family via chat or on your Highlights. We’re excited to see how you use photo effects to add more fun to your conversations, photos, and Highlights!”

Using the new ability is easy. Users can swipe right from a home screen on iOS and Android to access the camera. From there, the photo effects can be added (post snap of course) by pressing the magic wand button. A menu will appear showing all the available effects, which can be chosen by swiping right.

Again, this is all very Snapchat-esque. Microsoft is making a big play for Skype to be considered alongside communication rivals like Snapchat and WhatsApp. While the company’s tool is hot with businesses, it is not as popular amongst casual users.

Earlier in the year, a major update delivered Skype’s biggest design overhaul in a decade. Among the features was Highlights, which is where the new effects live. Highlights is Microsoft’s spin on Stories, a tool available in Snapchat. Users can now swipe up to call the camera, a more intuitive and rapid action which is part of Microsoft’s “camera-first” design.

Once a photo is taken, the image is editable with text, decorations, or other integrations. These images can be shared with group contacts or individuals. This is all relatively familiar, but users can now also share the images with Highlights.