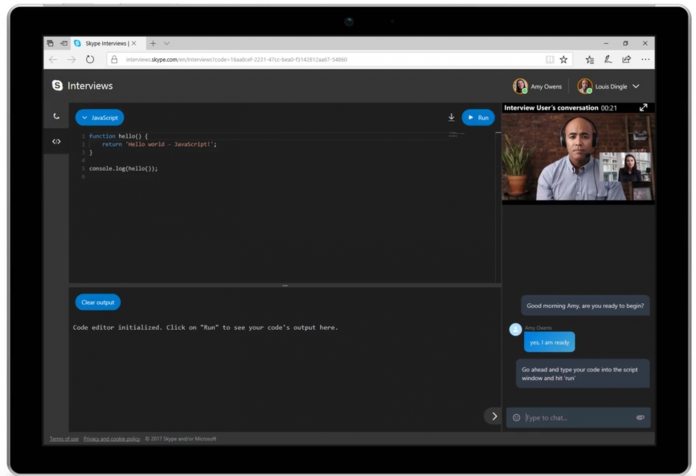 Physical interviews are always king, but they aren’t always possible. International hires, remote freelancing jobs and more all make it difficult to meet up with potential employees. Using video calls is so common that Microsoft created a specific web app, Skype Interviews, and it just got a major upgrade.

With it comes a refined UI, as well as a chat interface. While you wouldn’t always expect to need text chat over voice calls, it can be vital for providing instructions and information the candidate can look back on.

In that vein, document uploads have made their way to the service, meaning employers can provide information and candidates can attach sample work. However, many physical interviews incorporate real-time tests, especially in computer science fields.

As such, Microsoft is adding another five programming languages to current seven. These include F#, PHP, Go, Rust, and TypeScript. You’ll also be able to download code snapshots via a download button next to ‘Run’.

It’s an impressive update, considering Skype Interviews launched only five weeks ago. It’s clear that the app still needs some work, but already it’s making online interviews easier than ever before.

The development team is clearly listening to feedback and has asked users to send missing languages via the #SkypeInterviews tag on Twitter.

You can test the functionality for yourself on the official website.