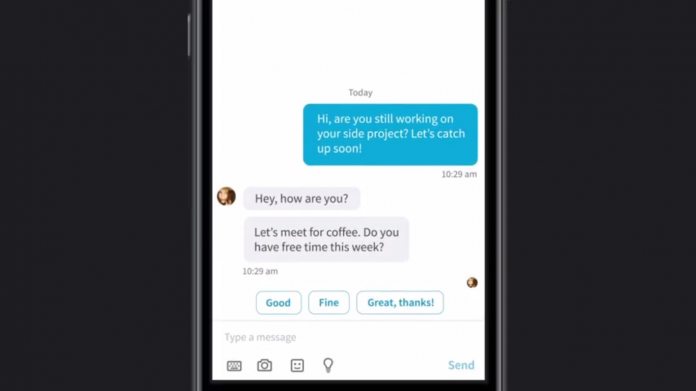 Back in April, LinkedIn announced a fresh messaging experience, which we in turn reported on. The revamped feature has been given more abilities, specifically making reply suggestions smarter. In a blog post, LinkedIn says it has leveraged machine learning to personalize reply suggestions.

According to the Microsoft-owned company, the reply now features three suggestions based on a message received. Machine learning allows the suggestions to be tailored in context with personalized replies. These suggestions will be given based on the conversations being held.

LinkedIn explains how this works in its blog today:

“For example, if an old friend asks if you’re available to catch up over coffee next week, you may see suggestions like ‘Yes I am,’ or ‘Sure!’ or ‘What time?’ Coming soon, we’ll be personalizing your smart replies further so that the suggestions are even more fitting for the conversation you’re having. For example, you may soon see a response like ‘Thanks, Joe!’ versus the more simplified ‘Thanks.’”

Smart replies are available today for LinkedIn users running the service on mobile apps and the website. In the interest of choice, the network allows members to turn smart replies off if they want. We guess many people will do this as the reply suggestions are currently available in just English. The company says more languages will come soon.

LinkedIn introduced its new model for messaging as a smarter tool for users. At the time, the company said 80% of its members see messaging has a key component of network. In turn, networking is viewed as important for career growth.

The new messaging experience allows users to contact connections from anywhere on the site. Increased accessibility means the platform is now open to messaging, wherever the user is.

“This means that you’ll never lose context when reaching out to your network,” the company says. “For example, you can have a conversation with a connection without ever leaving their profile, or reach out to someone directly from the LinkedIn Feed.”